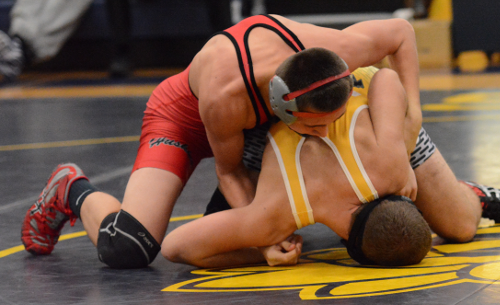 Brandon Nevison, Trent Mast and Kyle Simms all won their respective weight classes to lead Cardinal to the team title at the 2015 Russ Ward Memorial Tournament on Saturday.

It was Cardinal’s second straight win at the event, which was renamed this year in memory of longtime Cardinal wrestling supporter Russ Ward.

The Huskies finished with 139 points while Aurora was second with 112 ½ and Grand Valley finished third with 111. Newbury (104 ½) and Garrettsville Garfield (101) rounded out the top five.

“The kids really step it up when they wrestle at home,” Zeigler said. “I was pleased to see that. They wrestled well. The performance during the day is what won the tournament where everybody was winning. Even the young kids came through and won some matches that gave us points to win the tournament.”

“He was a surprise,” Zeigler said. “That was a good finish for him.”

Mast pinned all three of his opponents on his way to the 126 pound championship, his third straight Cardinal tournament title.

“Trent had an awesome day,” Zeigler said. “He had a good showing all day.”

“He had a nice day,” Zeigler said. “It was back and forth, on his back, off his back. He’s a hard one to pin down. He’s one of those wiggle worm kids. You think you’ve got him and next thing you know he worms out and if he gets on top he’s dangerous because he’s so powerful. He was on his back in a cradle and got an arm out and pushed over. He caught a head and arm and pinned him. It was an exciting match.”

“It was a good match,” Zeigler said. “He had him beat. We should have won it. We had like three minutes to get out from the bottom. Rhoads had one stalling warning but we didn’t get the second one to tie it. We got the first takedown and then Rhoads had a reversal and an escape. That was the difference. We’re right there with him. We definitely have our sights set on him because he knocked us out of a lot of stuff last year. He beat us at sectionals last year and that probably cost Neikirk a state berth.”

“He probably should have won in eh finals but he had a nice day,” Zeigler said. “The kid was on his belly and he kind of tried to turn him and just about that time the kid sat up and Bryn was on his hip and got caught on his back. He had a good showing all day.”

“He got there late because he took his ACT and then rushed in at the very last minute to make his first match against Joe Ule from Newbury,” Zeigler said. “He wrestled him really well and pinned him. He got caught on his heels a little bit against that Grand Valley kid, who is pretty tough. He snapped his head down and got him in a front headlock and then a cement mixer and it was over.”

Brezo finished third at 113 and Shanower was fourth at 138 after winning the tournament in 2014.

Cardinal hosts Cuyahoga Heights and Hawken in a tri-match on Thursday.