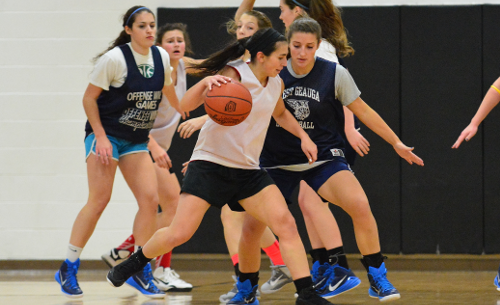 Huskies eager to take next step

Kirtland and Berkshire have dominated the Chagrin Valley Conference Valley Division over the past decade.

After beating the Badgers last season—twice–for the first time since 2002, the Cardinal Huskies hope to take another step in 2014-2015 and compete for the conference title.

“Success for us is being able to close the gap against some of the really elite teams that we play, like Kirtland. They kicked our butts last year,” said Cardinal coach Luke Kruse, who is in his second year guiding the Huskies. “We had some success against Berkshire; we beat them for the first time in about 10 years last year, which was exciting for the program. We want to get to the next level as a team. I think that’s our goal this year, to contend for the CVC and close the gap with Kirtland.”

The Huskies finished 8-14 overall and 4-6 in league play last season.

Kruse has been impressed with what he has seen in the first two weeks of practice.

“So far I see a team that wants to play team basketball,” he said. “They really trust each other. They’re looking out for each other. They’re a team that every day comes to practice and they’re striving to get better as a team and in their own individual skills. They ask lots of great questions and I think we’ll have a really good season because the fundamentals of team work and pride and looking out for each other are in place. It’s just a matter of getting our sets and our skills up to the level where we can compete with the good teams.”

While the Huskies lost three of their top four scorers to graduation, Kruse is confident Koches and Adams will develop into a solid one-two punch.

Koches led the team in scoring last season with 9.1 points per game and also contributed with 3.2 rebounds and 1.3 steals per contest. She was named first team all-CVC.

“She’s a very good, quick offensive threat,” Kruse said. “I think she’s going to get a lot of good looks for us this year. She has the ability to drive and draw fouls and make her foul shots.”

Adams finished her sophomore season with 3.5 points and 4.4 rebounds per game on the way to being named honorable mention all-CVC.

Those numbers should see a bump this season.

“Now that our post play really is going to feature her I think she’s going to have a breakout season this year,” Kruse said. “I’m thinking she can contend for first team CVC and get a lot of points for us. She’s very solid on the defensive end too, so she’s definitely someone that’s going to get a ton of minutes for us. We are really going to rely on Haley to stay out of foul trouble and put some points up for us this year.”

Polverine went from being the first player off the bench this season to starting point guard. She’s also one of the team’s top defenders.

She scored 2.9 points and pulled down 2.1 rebounds per game last season. She also averaged over a steal per contest.

“Her strength is her defense,” Kruse said. “She’s probably the best on ball defender on the team. Her shot is there when she looks for it but more than that on the offensive end she is unselfish and likes to get her teammates involved.”

Under the basket, Dhayer should help prevent opposing teams from getting the easy baskets.

Her height and aggressiveness will make it difficult for any opponent to get to the hoop.

“She’s the tallest, quickest and one of the best defenders on the team,” Kruse said. “Just with her length out there it’s going to be difficult if she gets in the right position and stays out of foul trouble for the other team to get good looks down low just because of her length.”

Emily Kruse also should see plenty of playing time once she fully recovers from offseason shoulder surgery. She scored 2.5 points and pulled down 3.3 rebounds as a sophomore.

“She’s a good low-key player and a stronger defender,” Coach Kruse said. “She should see a lot of minutes for us this season.”

Fenselon played limited varsity minutes as a junior but her hard work has her in position to see a lot of minutes as a senior.

“She has really stepped up in a big way this season,” Kruse said. “I think she’s really ready for some varsity minutes. She has a good shot when she’s got it going and she’s really working hard to improve on the defensive end. She’s definitely going to find her way into the rotation.”

Michael, Clark and Leichtman spent most of the 2013-2014 season on the junior varsity and will provide depth for the Huskies in 2014-205.

“We’re still trying to figure out exactly what their role is going to look like on varsity this year,” Kruse said. “They’re all three players that are going to work and we’ll see where they land in terms of their minutes and their spot in the rotation. There’s going to be some minutes available for one or two of those. We’ll see who steps up and earns it.”

Carney and Scribben will split time between the JV and varsity.

“Both are battling for the backup post position and will see varsity action,” Kruse said.

If it all comes together, the Huskies should have a say in who wins the Valley Division this season. It all depends on how Cardinal executes on offense and defense.

“We definitely have to get the ball into Haley in the low post. She’s phenomenal from the left side, which is sort of unusual since she’s actually a right handed person. For whatever reason, she has just developed some great moves from the left side of the block. If we can get her the ball down there she’s tough to stop and she can draw the foul,” Kruse said. “With our wings, it’s just getting Jess some good looks. She’s a great shooter and she’s not afraid to take it to the basket too.”

The Huskies aren’t going to overpower their opponents so they’ll have to rely on quick, accurate passes to find the gaps in the defense and step up to make the most of their shot opportunities.

Defensively, the Huskies rely on the 1-3-1 defense to overcome what should be a regular size disadvantage.

“That has been very effective for us,” Kruse said. “We just have to get in our spots from that and get the right rotations and just work our butts off on the defensive end to get stops. Against most teams, which are going to be bigger than us, we’ve got to get into position to box out and secure the loose balls.”

Cardinal opens the season at home against Bristol on Nov. 29.

“I’m excited for the season,” Kruse said. “I know the girls can’t wait to get those jerseys on for the first time for real game action. I’m just really thrilled with our progress so far and I can’t wait to see what kind of success we have as a team.”