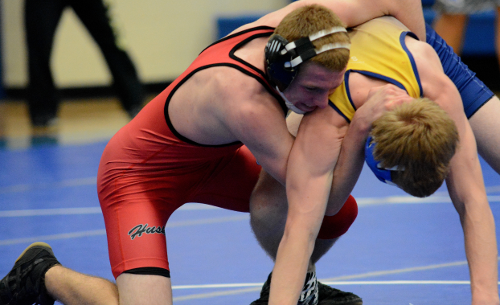 Independence won the swing matches and prevented the Huskies’ top wrestlers from earning additional bonus points in a 41-33 win in the first round of a double dual at Independence on Thursday.

“We definitely didn’t put our best team on the mat tonight,” Zeigler said. “We weren’t ready to wrestle. Independence came after us and that’s the difference in the match right there. We just didn’t perform well.”

Trent Mast, a returning state qualifier, defeated Nick Rossi, 9-0, at 120 and Brandon Nevison scored a reversal and three back points in the final 15 seconds of his 6-3 win at 126.

“Kudos to him, he stayed in the box and kept picking away at it,” Zeigler said of Nevison. “He actually improved as the match went on but in my eyes it should never have been there to begin with.”

Cardinal’s starting 138-pounder Craig Shanower, a returning district qualifier, was out of the lineup on Thursday, which left a big hole to fill. Independence picked up a pin at that weight class to make it 18-10.

Brandon Neikirk then won by a 15-0 technical fall at 145 to pull Cardinal to within two points of the Blue Devils.

A technical fall at 152 and back-to-back pins at 160 and 170 pushed Independence’s lead to 35-15 before Cardinal received three straight forfeits that left the Blue Devils in front, 35-33, heading into the heavyweight bout.

“We just wrestled flat,” Zeigler said. “We just did not come prepared to wrestle until it was too late.”

“We’ve got to go back to the drawing board,” Zeigler said. “It was a tough loss for us here tonight. My team is better than they performed.”