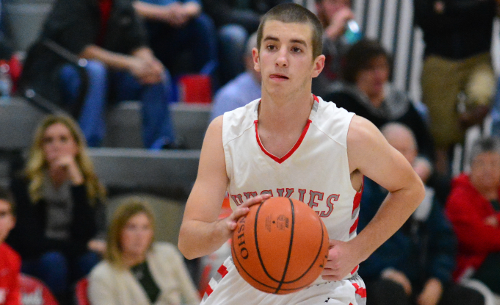 Cardinal missed on a game-tying 3-pointer with time winding down and Pymatuning Valley hit a decisive free throw to seal its 45-41 win over the visiting Huskies on Saturday.

“We had a chance in the fourth quarter, in the last minute, but we couldn’t get a shot off,” said Cardinal coach Jon Cummins. “We just can’t win the games we need to.”

The Huskies had the ball down three points with 30 seconds left on the clock.

Cummins called time out to set up the potential game-tying shot then was forced to stop play again a few seconds later when the Huskies had trouble getting a shot off.

“We had about 30 seconds we had the ball and called a time out to try to run a play. The kids got all flustered and we had to call another time out to get it set up,” he said. “We got a shot off and didn’t make it. They made one of the two free throws with one second left.”

The Lakers jumped out to a 15-9 lead after the first quarter but the Huskies rallied to pull to within 24-21 at halftime.

Craig Kaser, who scored a game-high 17 points, helped keep the Huskies in the game.

“He played well,” Cummins said. “He did a real good job of taking it off the dribble at the top. That was pretty much our offense when you score 41 points and he had 17. He definitely commanded everything up top and ran the offense. He did a good job defensively for us too. They had a nice point guard that only scored one point. He’s their second leading scorer this season so he did a nice job on him.”

Pymatuning Valley took a three-point lead into the final quarter then overcame a late Cardinal lead to close out the win.

“It was a pretty close game,” Cummins said. “The kids battled back. At the beginning of the game we didn’t come out playing too well. We played a better second quarter then came out a little stagnant in the third. We actually took the lead in the fourth quarter by about three points and then they climbed back in it.”

The loss dropped Cardinal to 2-4 on the year.

The Huskies return to action on Tuesday when they host Newbury. It will be Cardinal’s first home game since they opened the season on Dec. 6.