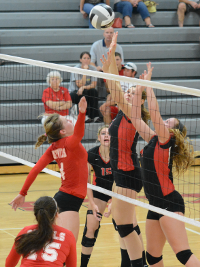 She didn’t expect to put her players in a playoff environment in the first game of the season but that’s exactly what happened in Thursday’s 3-2 loss to Crestwood, a Division II regional finalist in 2013.

“That was nice,” Shirkey said. “It was a hard fought game. I wanted to make sure we beefed up our independent schedule and we certainly did. If every match is like this then we should be ready for tournaments.”

The two teams combined for nine different match points in the fifth set.

“I keep track of earned points and unearned points and I quit taking them,” Shirkey said. “I just sat and watched. They were doing everything they needed to do. That was a hard-fought set there.”

“We quit taking care of the ball and we were making mistakes, not earning our points and giving too many to them,” Shirkey said. “I always tell the girls we’ve got to take care of the ball on our side of the net. When that doesn’t happen things start to snowball.”

Once the Huskies got its offense going they went on to win two straight sets.

Alyssa Shirkey led the Huskies with 19 kills and 5 blocks and Kaitlin Bean, an Ashland recruit, contributed with 11 kills. Caitlyn Lechene and Maddie Bean, who had 38 assists, both had 6 kills and Kayli Staric had 5 for Cardinal.

“I’ve got an arsenal of hitters this year,” Coach Shirkey said. “They were hard hitters so it was good to be able to play against that. We’ve got some things to work out but that was a great start.”

The Huskies also improved at the service line.

Hayley Adams recorded three aces, two of them in the second set to give the Huskies a lead they never relinquished.

“We really have strong serving,” Shirkey said. “We noticed a couple of their players were really getting tired so we targeted them in our serving and it worked. They weren’t able to get the ball to their setter to be able to run their middle attacks and that’s what hurt us in the first game. Their middle hitters were really strong in the first set; when we were able to do that we played better.”

The Huskies return to action on Saturday when they travel to Hawken for a tri-match with the Hawks and Grand Valley.

“I’m optimistic,” Shirkey said. “If that’s how we play we’re going to win some matches this year.”