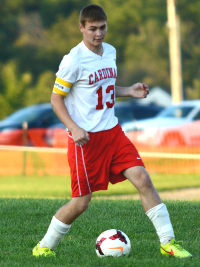 The sting of last season’s last second loss to rival Berkshire didn’t sit well with the Cardinal soccer team. It took nearly a year, but the Huskies avenged that loss with a 7-0 shutout of the Badgers on their home turf on Tuesday.

“That (loss) was part of it but the main thing was they were just happy to see their hard work pay off,” said Cardinal coach Dale Holcomb. “They have been working really, really hard. We had some near misses earlier this year with Geneva and a tie with Conneaut. Those were games they thought they had and they just wanted to get another W.”

The offensive explosion was the direct result of Cardinal’s efforts on the practice field.

Erin Ross had three shots on goal but couldn’t find the back of the net.

“She normally doesn’t get to take shots. She’s usually crossing the ball in, she has a tremendous cross, but this time because of good distribution of the ball she was able to make some runs at the goal and take some shots,” Holcomb said. “Hopefully all the hard work in passing will work out for the rest of season.”

With Cardinal’s offense dominating possession, the Huskies were never really threatened on the back end.

“The defense kept it buttoned up pretty tight to get a clean sheet for Evan,” Holcomb said. “They did a very good job of communicating on the back row. I’m really proud of how the kids played against their rival.”