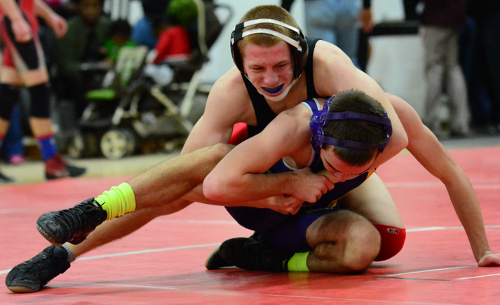 Cardinal kicked off the 2015-2016 season with a seventh place finish at Aurora’s Paulie McGhee Invitational on Saturday.

Trent Mast finished second at 126 pounds and six others placed among the Top 8 at their respective weight classes.

“I was happy for our first outing,” said Cardinal coach Jeff Zeigler. “I have, I wouldn’t say a young team, but I have an inexperienced team, and everybody isn’t at the weight where they’re going to be or where they need to be but we competed where we were able to go and we did OK.”

Mast, a junior, drew a first round bye then defeated Padua’s Brian Shaw, 17-2, in the semifinals. He fell to Rootstown senior Tony Paolucci, 4-3, in the championship bout. Paolucci is a two-time state qualifier.

“We just can’t beat that kid,” Zeigler said. “He beat (Ian Mast) last year. We were right there with him. We’ll get him. Trent made one mistake in the match and that cost him the match. He got taken down in the first period. We knew Paolucci. We scouted him pretty good, but Trent just kind of walked into his move but it was close. We were right there.”

Senior Brandon Neikirk opened the tournament with a bye then fell to eventual champion Danny Novak of Aurora in the semifinals. He rebounded with a pin of Sugarcreek Garaway’s Tanner Petitte to finish third at 145.

“Neikirk had a nice tournament,” Zeigler said. “He got beat by Danny Novak from Aurora, who has been kind of his nemesis from the area. He beat him last year in the same tournament and at the CVC. Novak is a quality kid. Neikirk is right there. He gave him all he wanted. It was a good match and then he looked stellar the rest of the day. I’m really pleased with his attitude and how hard he’s working.”

Junior Brandon Nevison was fourth at 120.

“Nevison did an awesome job,” Zeigler said. “He had a really nice tournament. The guys he lost to were just better than him. He didn’t wrestle a bad match all day.”

“He had a couple good matches throughout the day and did a nice job for us,” Zeigler said. “He’ll be dropping (to 182). He’s a tweener right now, giving up a little bit of weight there at 195. He’s trying to get down for next week. He’s looking really good this year and moving really well for a big guy. He got a lot stronger too.”

Fabiny returned to wrestling after a several year hiatus. He pinned Brush’s Steve Visnicky in the 285-pound seventh place match.

“I don’t know how much wrestling experience he has, I think he wrestled a little bit in junior high or youth, but he was very surprising,” Zeigler said. “I didn’t know what to expect. He’s a good kid and had to cut a lot of weight to make the 285 class. He’s starting to move real well. I was shocked. He wrestles with a lot of heart and he’s going to be a great help for us this year. It’s nice to have a heavyweight after going a couple of years without one. We had Lester Troyer for a couple of matches last year but that’s about it.”

“Brezo, this is only his second year and that was a really tough weight class over there,” Zeigler said. “Craig Shanower looks much better. He’s one of the ones who probably isn’t at the weight he needs to be at. Sometimes he can wrestle like a state champ one match, he had two or three really good matches all day long, and then he just kind of stumbles. We’re working on that. A lot of it is mental. Once the pressure starts getting to him he makes some bad choices but we’re working on it.”

Junior Kyle Simms also returned to the mat after sitting out last season.

He competed at 182 pounds but likely will drop to 170 at some point this year.

The Huskies travel to Kirtland on Thursday then host the Russ Ward Memorial Tournament on Saturday.