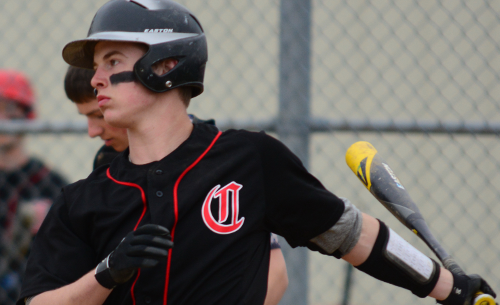 Behind Andrew Miller and some stellar defense, Cardinal shut down host Garrettsville Garfield’s offense in the final three innings to pull out an 8-3 win over the G-Men on Wednesday.

Miller, who relieved starter Alan Michener in the third inning, allowed just two hits and one run while striking out five to pick up the win.

“Michener started and did a nice job overall,” said Cardinal coach Brian George. “His pitch count got up there and we thought going forward with what we have the rest of the week it would be a good idea to go to Andrew. He came in and did a nice job. He got us out of a bases loaded jam. He pitched extremely well, especially down near the end of the game.”

Cardinal led 6-3 after four innings and Miller made sure that lead would stand. He faced just one batter over the minimum during Garfield’s final three at bats. Garfield grounded out five times and Miller struck out three G-Men down the stretch.

Led by KC Cress, who was 3-for-3 with a double, two runs scored and two runs batted in, the Huskies collected 12 hits.

Clark Thurling, Brant Zemelka and Logan Schultz each had two hits for the Huskies. Zemelka had three RBI and Ryan Bruncak knocked in a pair. Bruncak also saved a couple of runs on defense when he made a diving catch in centerfield and also had an over-the-shoulder catch.

Even more important, the Huskies knocked in three runs on five hits when they were down to their last out of an inning.

“We did a nice job getting 12 hits tonight,” George said. “Our offense is clicking pretty good. We had a lot of two-out hits with runners in scoring position.”

The Huskies improved to 8-12 overall with just a non-conference road game at Independence on Friday left on the regular season schedule. They have averaged over nine runs per game in their last five contests.