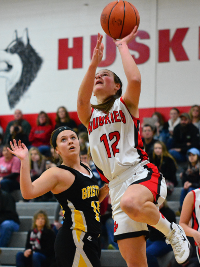 MIDDLEFIELD—Cardinal coach Luke Kruse saw a season’s worth of situations unfold in the Huskies’ 43-39 win over visiting Bristol on Saturday.

The Huskies jumped out to a 15-4 first quarter lead then had to hold off the Panthers, who made several runs to make it a game.

“After that first quarter where we got off to just a hot start with tough defense, we thought we might cruise to an easy one but obviously that didn’t happen tonight,” Kruse said. “Give Bristol credit. No. 44, I haven’t seen them before but she is one of the top players I have ever coached against. She was outstanding. She was all over the floor.”

She scored six points in an 8-0 run that pulled the Panthers to within 15-12 midway through the second quarter and 10 of Bristol’s 12 third quarter points.

In an effort to slow down Stoneman, Kruse assigned Cheyenne Polverine, one of the team’s top defenders, to guard Bristol’s top player. That helped to keep the Panthers at bay.

“I want to give credit, once we switched to a box and one type defense and put Cheyenne on her, she did a nice job of limiting her touches and we forced some of their other players to step up and make shots and they did,” Kruse said. “They made it a really close game.”

Bristol’s big runs left the Huskies with a 30-26 lead entering the fourth quarter.

That’s when senior Jess Koches and junior Haley Adams were at their best.

Adams, who scored 11 points in the game, hit one of two free throws and Koches scored the next four points to push the Cardinal lead to 35-26. Koches finished the game with a team-high 12 points.

“They played well,” Kruse said. “I know Haley was frustrated down there tonight. She didn’t get as many clean looks on the block as she usually does. I think those will start to come. I’ll give her credit, a lot of times the player I saw last year she would have got her head down and she would have got frustrated and would have stopped giving that full effort on defense. Tonight she stuck with the game plan and she was definitely huge in helping us get that victory tonight.”

The Huskies converted just 3-of-10 free throws in the first three quarters but finished the game 5-of-8 to seal the win.

Junior forward Kathryn Dhayer scored just two points in the game but she played a much bigger role on the defensive end of the floor. She ended the game with 11 rebounds and eight blocked shots.

Senior Lexy Fenselon also came up big when the Huskies needed to score.

The Panthers pulled to within 40-36 with 1:09 left in the game and Fenselon drew a foul 30 seconds later. She drained both free throws to push the lead back to six points.

“I’ll give our team credit,” Kruse said. “We never gave up the lead, even when they got really hot. We kept our heads in there, even when we made some turnovers and missed some rotations on defense or we missed some open shots. I didn’t think that got us to the point where we stopped playing our game and believing we had a chance to win.”