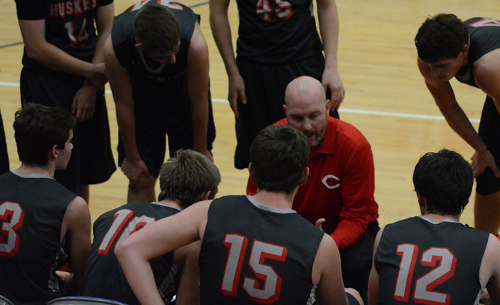 Huskies pull away from Skippers

Cardinal’s starters sat out the fourth quarter for a second straight game on Tuesday.

The Huskies beat Newbury, 59-34, last Wednesday and came back to beat host Fairport Harding, 68-43, on Tuesday for their fourth win overall and second straight.

“It was a nice game,” said Cardinal coach Jon Cummins. “It was nice to get back out there and get another win. It was our first conference win, so that was good for us.”

Eleven of the 12 Huskies who saw action scored in the game at Fairport while all 12 scored against Newbury.

“The key to the last two victories is the kids are plying much better team basketball,” Cummins said. “They’re buying into it and playing much better defense. We were fortunate again to get all those guys in. The starters didn’t play in the fourth quarter for the second game in a row and it’s nice to have the bench guys play well. We won the fourth quarter, points-wise, which means the guys are playing hard and not just going through the motions.”

Cardinal used a double-digit run in the third quarter to turn an 11-point halftime lead into a comfortable victory.

It started with sophomore guard Parker Kosh’s effort on defense.

Craig Kaser led the Huskies with 13 points and Cody Naftzger also scored in double figures with 10. Jake Francis and Hayden Cummins both pitched in with eight and Luke Timas, Robbie Mulh, Kosh and Andrew Miller all had six.

Kody O’Brien finished with just two free throws but his contribution went beyond the scorebook.

“He did nice job for his first start of the season,” Cummins said. “He’s just a very smart kid. I can put him anywhere. Sometimes he comes in and plays guard or if I go small he can play forward. That gives us a different look if we want to mix things up.”

The Huskies host Kirtland on Friday then travel to Richmond Heights on Tuesday.