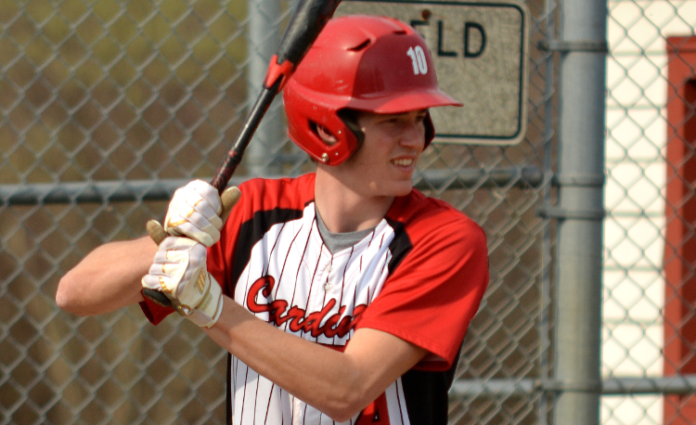 Cardinal scored three runs in the top of the seventh and added six more in the eighth to pull out an improbable win at Independence on Tuesday.

The Huskies trailed 6-3 entering the seventh but made the most of their opportunities in the final two innings to pull out the win.

“I think it was just a confidence thing,” Cardinal coach Seth Klepper said. “These kids, they felt relaxed and believed in themselves. After losing the games that we did, getting run-ruled and having the kids overcome adversity and pull it off, I don’t think they ever felt they were out of it. They had a lot of confidence in themselves.”

Independence took a 2-0 lead in the bottom of the fourth when Jordan Mallernee drew a one-out walk, Jamie McMahon singled and Tim Marcinko was hit by a pitch to load the bases. Mallernee and McMahon scored on an error.

The Huskies responded with three runs in the fifth.

Parker Campbell and Brandon Collins walked and Dan Heredos singled to load the bases. Brice Hogue, Kale Byler and Matt Carney all hit singles to give the Huskies their first lead, 3-2.

It didn’t last long as Independence put up a four-spot in the bottom half of the inning.

Nathan Steffas, Connor Blum and Marcinko each hit singles in the inning and Nick Rossi doubled.

The score remained 6-3 until the seventh when the Huskies turned their patience at the plate into three runs to force an extra inning.

Collins was hit by a pitch to lead jumpstart the rally and Heredos, Hogue, Byler and Carney all drew walks. Two runs were forced in by the free passes and Hogue stole home to tie the game.

A hit batsman, three walks and a pair of doubles led to six Cardinal runs in the eighth.

Carney led the Huskies at the plate as he finished the day 3-for-4 with three runs batted in. He also picked up the pitching victory after holding the Blue Devils scoreless in 3 1/3 innings. He struck out five.

“Matt has been struggling with his back all year and with him, it’s one of those, ‘Hey, you got one or two innings in you?’ or he’ll tell me he’s got a couple of innings in him and we’ll use him that way,” Klepper said. “He’s been awesome on the hill—he hasn’t given up an earned run all year–and at the plate, he’s done what he has for the last few years and just hit the ball.”

Marcinko and Rossi both finished with two hits for the Blue Devils. Rossi also knocked in a game-high four RBI.

Cardinal scored 12 runs on just nine hits but the Huskies drew 10 walks to improve to 5-6 overall and 5-4 in the Chagrin Valley Conference Valley Division.

“I would like to see it continue on so we go into the postseason with some confidence and learning how to win in those moments and with the kids believing in themselves,” Klepper said of the confidence the Huskies gained with the win.

The Huskies host Independence on Wednesday