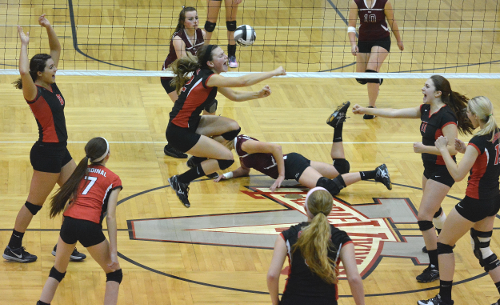 The sixth-seeded Huskies opened postseason play with a 25-10, 25-8, 25-7 sweep of No. 9 Pymatuning Valley on Wednesday and will play No. 3 LaBrae in a district quarterfinal game on Thursday at 5:30 p.m.

“Coming into this we had never played PV (this season),” said Cardinal coach Karisca Chambers. “They’re from a different area from us, so I wasn’t sure how it was going to go. When we’re not used to the teams we play we don’t keep up that high intensity but I thought the girls did a nice job.”

Cardinal jumped out to a 7-2 lead in the first set then struggled to finish off the Lakers. Pymatuning Valley rallied to pull to within 10-6 before Huskies scored 15 of the next 19 points.

“We came out kind of flat,” Chambers said. “The first game is always rough for us. I don’t know why but we have a hard time getting going.”

Senior Caitlyn Lechene had a lot to do with Cardinal picking up the intensity.

She finished the match with a team-high 12 kills and 17 digs and also recorded two service aces.

“After that first game, going into the second and third game, Caitlyn was attacking the ball and not just going up and hitting it over but going after it,” Chambers said. “That was extremely important. She’s our offensive threat. When things are not going well, or even if they are going well, I look at our setter, Maddie (Bean), and tell her to go to Caitlyn. Set her, she’s on. She attacks the ball well. Her back row attack was extremely strong tonight. It was actually more effective than her front row attack, which is good for us. That’s what’s nice about Caitlyn is she’s so diverse. She can play back row or front row. It’s hard for other teams because a lot of times they think they’re best hitter is in the back row and we’re OK, but not with Caitlyn. She can hit just as well from the back row.”

Cardinal’s attack, which included 12 digs from six kills from Jordyn Schultz and four from Haley Adams, kept Pymatuning Valley from mounting an offensive threat. The Lakers sent too many free balls back over the net.

“That was nice for us because then we can run our faster offense,” Chambers said. “I told the girls going into districts that we can’t run a lot of high balls. We need to speed it up a little bit because when we come across LaBrae and Berkshire, who are better, more experienced teams, we have to be able to mix it up. Going straight up the middle, straight right side and straight outside is easier to block. Every time it was free I said I want them to run something quick and we did that tonight. It was effective for us.”

Bean finished with 29 assists, six digs and three aces. Megan Zeigler contributed with 12 digs and 10 serve receptions and Schultz recorded 16 digs. Adams also had a pair of blocks for the Huskies.

Cardinal advanced to Thursday’s sectional championship against No. 3 seed LaBrae. The game is scheduled to begin at 5:30 p.m.

“This was the first game of districts,” Chambers said. “We had to get past this and take one game at a time. We’ll see LaBrae next but the main focus tonight was just getting past PV and not trying to look too far into the future.”