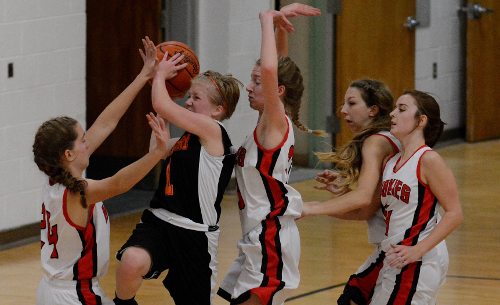 The Huskies opened the season last weekend with a 65-point outburst in a win over Bristol and on Tuesday they topped it with a 71-28 win over visiting Newbury.

“Our offense is really clicking right now with the ball movement, with the unselfishness, with girls stepping up and making shots and their shots look good,” said Cardinal coach Luke Kruse. “They’re setting their feet and they’re hitting them. I’m never going to complain if we put up 60-70 points. We’ll win a lot of games if we can keep doing that.”

The 65 points scored against Bristol were the most scored by the Huskies since January 2014.

Senior Haley Adams led the charge for the Huskies with 14 points and now averages 12.5 points per game, double her average from last season.

“She’s someone that’s been playing varsity since her freshman year,” Kruse said. “She’s had her ups and downs but it’s really clicking for her this year. She’s playing with a lot more poise and a lot more composure and confidence. She’s not letting the little mistakes get her down and playing through them.”

“She was up and down in the scrimmages but I knew that she’s really the future for us in the point guard position and I didn’t want to wait to put her in there,” Kruse said. “I threw her in to start right from the get go and she’s had back to back 12 point games. She doesn’t look like a freshman out there. She plays poised. She plays confident. She’s already developing chemistry with her senior teammates and she’s just a real team player. She wants to please us and we’re very happy with what she’s done as a freshman through two games.”

“Emily was very assertive,” Coach Kruse said. “I challenged her at halftime. She settled for a couple not the best shots so I told her to take it to the basket. In the second half she took it to the basket and she made most of her shots in the second half. Hopefully this is a turning point to build her confidence and know that if she’s aggressive and takes it to the hole she’s tough to stop with her athleticism.”

Cardinal’s defense was nearly impenetrable, especially in the second half.

The Huskies allowed just five field goals in the final 16 minutes of play.

“We tried to mix up looks a little bit,” Kruse said. “We did some zone, we did some man to man and some half-court trap just to keep the opponent on their toes. For the most part our rotations were pretty solid. We got in the right spots and were able to force some turnovers.”

The Huskies, who improved to 2-0 for the first time in at least five seasons, host Crestwood on Saturday.