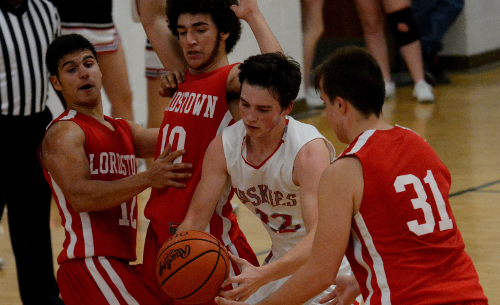 MIDDLEFIELD—Cardinal got out to a fast start and never looked back in a 63-48 season opening win over visiting Lordstown on Friday.

The Huskies were aggressive in the early goings on both ends of the court in building a 14-0 lead that helped them secure their first win of the season.

“I think we just came out ready to play from the get-go and I think that’s what helped us to get out to that lead,” said Cardinal coach Jon Cummins. “They were just ready to go. We had a nice talk in the locker room. I let them know, especially our seniors, it’s your last first game but I said don’t think about that. We’ve got a minimum of 23 games this year so go out there and play hard. We’ll take care of business tonight and then we’ll move to our next game next week.”

Senior Craig Kaser scored seven of his game-high 19 points in the first quarter and Cody Naftzger and Jake Francis dominated the post on defense. Both players had a block in the quarter.

The Huskies led 19-7 after the first quarter and extended their lead to 32-18 at halftime.

Lordstown made it interesting in the second half but never threatened.

Andrew Miller scored 13 points for the Huskies, all but two of them in the second half as Cardinal shifted its focus to scoring from down low.

“Andrew had four or six points right away just in the second half by getting it down lower,” Cummins said.

Francis and Robbie Muhl both finished with eight points and Naftzger had seven. Luke Timas and Hayden Cummins both pitched in with four.

“I thought we played pretty good,” Coach Cummins said. “I was happy with the effort. These kids play hard. They know I’m on them and I’m going to ride them hard to get the most out of them. They played hard. The guys on the bench came in and did a solid job as well. As a whole my starting five did an excellent job. They’ve got to learn some things because we’re still kind of young experience-wise but we’ll get there.”