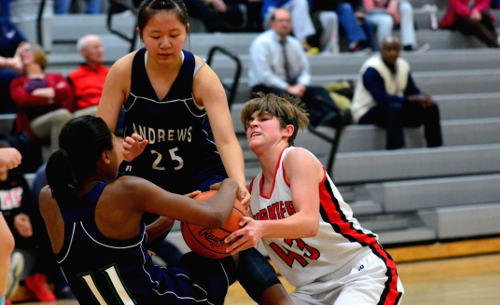 MIDDLEFIELD—Jess Koches scored 16 points and Haley Adams and Lexy Fenselon both scored 10 to lead Cardinal to a 53-30 win over visiting Andrews-Osborne Academy on Thursday.

The win snapped a streak of nine consecutive losses dating back to Cardinal’s 43-39 season opening win over Bristol on Nov. 29.

“Win No. 2 took a lot longer than I expected but we’re really happy to get it now,” said Cardinal coach Luke Kruse. “The girls have had I think 10 practices or so since their last game, which at this point in the season is a really long time. I was hoping we’d kind of come out and kind of take the first punch in the first quarter and let some of that energy out being that it’s been almost two weeks since our last game and we did.”

Fenselon scored eight of her 10 points in that first quarter to help the Huskies build an early 13-4 lead.

“The energy, the ball pressure, the shots were going in,” Kruse said. “I knew from those first three or four minutes that we had what it took tonight to come away with a victory.”

Andrews closed on the Huskies in the final minutes of the first quarter to pull to within 15-9 but that’s as close as the Phoenix would get.

Cardinal won the second quarter, 16-4, and led by at least 20 points most of the game.

“They made one run somewhere around the second quarter and got it within three or four and I challenged the girls in a timeout that we’re not going to let them come in and take this away from us,” Kruse said. “They responded to the challenge. It was 20 points or more most of the game. I was happy with the fact that we didn’t let them get another run after that one. We shut them down.”

For the Huskies, the win started with their defensive effort.

As a team Cardinal recorded eight steals and pulled down 13 defensive rebounds.

“The old basketball adage is great defense leads to great offense and it’s absolutely true,” Kruse said. “If you can get them to not even get it on their side and get the ball at half court that creates fast breaks and easy shots. It’s that momentum and energy it creates when you play great defense and can get the ball before they get a chance to shoot, obviously that momentum carried us a lot tonight and we played a good complete game.”

Koches scored seven points in the third quarter as the Huskies sealed their fate.

“Jess has been playing really great basketball the last couple weeks even through some of our losses,” Kruse said. “She’s been someone that has stuck out with her energy and her rebounding. We really rely on her to put some points on the board and she’s been doing a great job of doing that and she’s also been pushing herself on the defensive end.”

Fenselon was a perfect complement to Koches.

“Lexy, she had a lot of energy tonight,” Kruse said. “She was getting on the floor. She made some big shots. Those two at the guard position definitely did a good job getting good looks and helping us on defense as well.”

Adams was solid on both ends of the floor. She recorded three rebounds and a steal to go along with her double-digit scoring.

“It was great to see her get a good game again,” Kruse said. “She definitely was a beast down low, which was good to see on that left side. She was making some shots down there and rebounding the ball and just kind of being vocal out there. We rely on her to call out the defensive sets and keep our energy up. She does a great job doing that.”

Overall, the Huskies shot 17-of-36 from the floor.

“It was a good complete game for everybody,” Kruse said. “When Cheyenne (Polverine) was on their top player she did a good job of slowing her down. Everyone contributed tonight. Everyone got lots of time in there. It was good to see a complete basketball game where the entire team contributed to the result.”

The Huskies return to action on Saturday when they hope to avenge an overtime loss to Fairport Harding.

“We’re hoping we can go in there place and get one back,” Kruse said. “We’ve had that one circled on our calendar for a while. They’re a good team but if we come ready to compete we’re hoping we can take one back from them.”