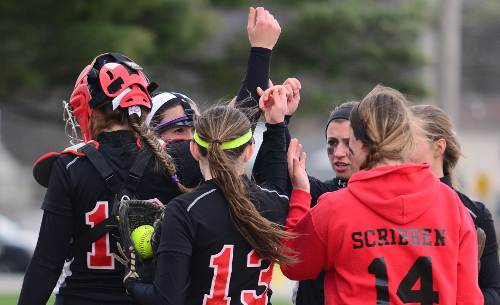 Delaney Leichtman and Dawn Scribben both had extra bases hits in the top of the 10th inning to lead Cardinal to an 11-9 win over Fairport Harding on Wednesday in a game that began on April 13 but was halted due to darkness after the eighth. The game resumed at Cardinal before the second game of the season series and the Huskies quickly took the momentum.

Jess Koches drew a one-out walk and Leichtman doubled to make it 10-9 and Scribben tripled to close out the scoring.

“They came out and played with some good intensity,” said Cardinal coach Dennis Ikeler. “They were up and played really well the last two innings to finish off that game.”

Leichtman replaced Ashleigh Shepard, who is out with an ankle injury, in the No. 2 hole in the batting order and made the most of her opportunity.

“We put her in a tight spot and she stepped in there and did a really nice job,” Ikeler said. “She got ahold of the ball and drove it all the way to the right field fence. That put a little spark into the girls. It was nice to see her step up.”

“Dawn has been struggling a little bit but she’s coming into it now,” Ikeler said. “She got ahold of that one. It’s good to see her start to make connections on the ball too.”

Jasmine Vunak, who had missed five straight games with an injury, returned to complete the game she started over two weeks ago. She pitched a scoreless ninth and 10th innings to pick up her first win.

Koches finished the game 4-for-5 with a double, four runs scored and four runs batted in. Shepard was 2-for-3 with a triple and Megan Baril and Vunak also had two hits for the Huskies, who picked up their second win.

“Fairport had some good hits and got girls on base,” Ikeler said. “They had a girl come up and hit a home run, which hurt us, and it happened again later in the game. They got six runs off of those. They have some good players. It’s a good team.”

Baril was 3-for-4 in game two while Koches had two hits, including a triple. Leichtman was 2-for-4 and Allissa Nevison was 2-for-3 with a double.

“Allissa stepped in and had to catch for me later in the game,” Ikeler said. “She’s stepping in and filling some shoes for us.”