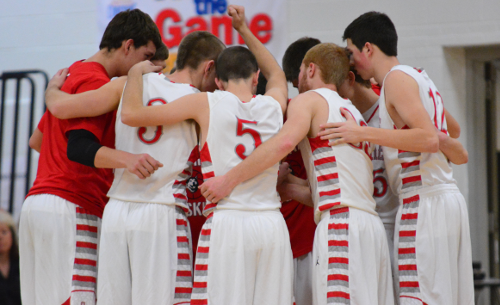 Cardinal jumped all over Ledgemont in the first half and cruised to a 78-42 non-conference win over the Redskins on Tuesday.

The Huskies, who improved to 1-1 on the year, scored 30 points in the first quarter and led 56-17 at halftime.

“We came out playing hard,” said Cardinal coach Jon Cummins. “That’s what I told them, we were here two years ago and we lost to them here. (Ledgemont) has a really good team. We came in and kind of underestimated them and they beat us. They played better than we did. They executed better than we did. This year we didn’t want that to happen. We came out and I told them they better come out and play hard.”

The rout started early as the Huskies scored in bunches while stifling the Ledgemont offense in the first quarter.

“I thought they all came out just ready to play,” Cummins said. “The first five that went out there set the tempo for the whole game. That starting five did a great job for us.”

Junior guard Craig Kaser scored all nine of his points in the first quarter.

“He’s done well for us,” Cummins said. “He’s a floor leader out there. He helps out a lot. He’s very coachable. That’s an important thing. Some kids you can tell them on the fly what’s going on and he can do it right away. He’s not a kid that’s going to make excuses. Nowadays people want to make excuses all the time. He’s one that says, ‘OK, yes coach,’ and does it. It’s nice to have that because there’s not a lot of kids like that.”

“I told him to be aggressive,” Cummins said. “I wanted the kids to attack the basket whether in a zone or a man. You’ve got to hit the gaps and attack the basket hard and try to get some of the guys in foul trouble. It shows them we’re here ready to play right from the get-go instead of passing it around. I like to come out with a lot of energy that’s why we full-court pressured them and tried to make things happen.”

Miller helped to shut down any chance the Redskins had of scoring inside the paint.

“He did a nice job tonight,” Cummins said. “He was really working hard, understanding that he’s got a bigger body out there without someone that could actually guard him, as far as their size. He did a good job getting down low and trying to really get the ball into him and he was able to finish.”

The Huskies open conference play on Saturday when they travel to Berkshire.