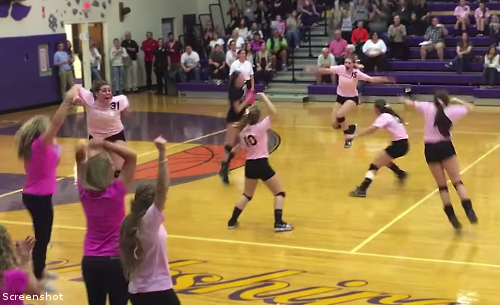 When Cardinal lost 3-1 to Berkshire back on Sept. 10, the Huskies’ chances of winning a third straight Chagrin Valley Conference Valley Division title was in jeopardy.

After Thursday’s 3-2 win at Berkshire, the Huskies are back on track and in a tie with the Badgers with two league games remaining.

“That’s the moment we’ve been waiting for the entire season,” said Cardinal coach Karisca Chambers. “Obviously, I’m looking forward to districts and moving on but we needed that, especially after losing to them on our home court and hearing all the, ‘Berkshire is predicted to do this and this and this,’ and, ‘Berkshire is going to win the CVC.’ It’s nice to prove everybody wrong and show that we might not have the two seniors from last year but we still have solid program and a ton of good athletes coming up who are going to work hard to get that title.”

The moment Chambers referenced came in the fifth game with the Huskies leading 14-11 after watching their 8-2 lead slip away.

Berkshire's McKenna Tucek sent a floater down the left sideline. It touched down about an inch out of bounds putting an end to the Badgers’ rally.

“Honestly, I got goosebumps instantly,” Chambers said. “When Berkshire started coming back I looked at Caitlyn Lechene and I looked at Maddie Bean. I said, ‘One point is separating you from this CVC title with Berkshire right now; one.’ I think that kind of brought them the reality and they got everyone on the same page. As soon as the ball went out I just jumped up in the air. The bench ran out in the middle of the court. There were smiles everywhere and cheering. It was such an amazing moment.”

“It’s almost like you can’t even describe it because we lost the first game and it was sort of déjà vu, we were at a point ready to panic,” Chambers said. “We were just like, ‘We can’t let the same thing that happened at our court happen here tonight.’ What the girls did differently this time than we did against Berkshire the first time, we had the lead most of the game. We were up. Berkshire came back and we’d be up by two or by three and they’d start creeping back, and then it would be tied and they’d be up by a couple. It was back and forth, so really it was anybody’s game.”

This time, the Huskies rallied for a 25-21 win to force the fifth game.

“The fourth game is always tough, especially when you’re down,” Chambers said. “I said, ‘We’re in survival mode right now. You need to play the best volleyball that you’ve played all season.’ I told the girls a couple weeks ago when we played Kirtland that that was the best I have seen them play. Not only fundamentally were they were on and they were moving but they played with intensity and they played as a team. I said take a step back, remember that game and bring all of that energy, all of that intensity, all of that hard work you did that game and put it on the court.”

The Huskies jumped out to an 8-2 lead in the fifth game but the Badgers didn’t go quietly. Berkshire rallied to cut Cardinal’s lead to 14-11 before Tucek’s floater landed out of bounds.

Lechene led the Huskies with 17 kills, five blocks and 20 digs.

“This win was amazing,” Lechene said. “We knew we could beat them and we were able to feed off of their crowd giving us momentum. For the most part throughout the game, we kept our energy up and never got upset with each other. We played together and as a team. I'm so proud of us and how we played. In the last set we just kept pushing. We knew this was our game and we just worked one point at a time.”

Bean contributed with a team-high 22 assists and also scored three aces and dug 11 balls. The sophomore was part of last year’s CVC championship team and she knows how important it is to stay in the hunt for a third.

“It was a great feeling since we kept the tradition going,” she said. “Knowing that we had nothing to lose coming into the game we gave it our all. The team never got down on each other and I was so proud of them. Being up 8-2 in the fifth set was an awesome feeling because at that point I knew if we stayed focused and if we played our game we could win the game.”

The Huskies improved to 16-4 overall and 11-1 in league play. They close out the regular season with league games against Harvey and at Cuyahoga Heights next week. To win the CVC outright the Huskies have to win both and Berkshire must lose one of its final two league games.

(Videos from the News Herald)