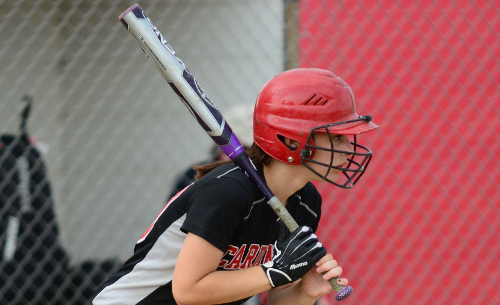 Sixth-seeded Cardinal entered Tuesday’s Division III sectional semifinal at fourth-seeded Hawken with just four wins but the Huskies had been playing their most competitive softball of the season heading down the stretch.

They also weren’t intimidated by their hosts as they jumped out to a 7-1 lead then came from behind to stun the Hawks, 12-10.

“It was a little bit too close for my comfort,” said Cardinal coach Dennis Ikeler. “They did a really nice job. They didn’t give up on me tonight, which is a really big accomplishment.”

After a scoreless first inning both teams pushed a run across the plate in the second. Cardinal then took a 3-1 in the third when Megan Baril hit a leadoff single and Delaney Leichtman hit a two-run homer over the centerfield fence, her first career out-of-the-park homer.

“It was a low, outside fastball on the first pitch,” Leichtman said. “It felt like a huge weight was lifted off my shoulders. I've been in a slump the past few games with striking out. The feeling was almost indescribable.”

Leichtman finished the game 3-for-5 with three runs scored and she knocked in three more.

Cardinal blew it open with a four-run fourth inning.

Baril and Leichtman both hit two-out singles and Dawn Scribben doubled to make it 5-1. Haley Adams walked and Jess Koches and Ameleya Loeser both singled to push the Husky lead to 7-1.

“We were feeling really good,” Ikeler said. “We were making contact and defensively we were playing really well. Offensively, everybody was hitting and Delaney hit a home run for me. Everybody was doing a really nice job.”

“There were some walks and they had a couple of good hits out there,” Ikeler said. “I was just hoping that the girls didn’t give up on me and they didn’t. They came out the next inning and got right back into it.”

Cardinal took the lead for good in the sixth when the Huskies pounded out five straight base hits to push their lead to 12-10.

Leichtman and Adams both doubled in the inning and Baril, Scribben and Koches all singled.

The Huskies’ top five batters went a combined 16-for-23 with 12 runs scored and nine RBI.

“They felt it,” Ikeler said. “They hung in there and wanted it bad. Everybody was playing tough. They all played a really nice game. I’m hoping this all carries over to tomorrow. Wickliffe is a very good team and we have to play the best we can.”

Cardinal was energized by the return of starting pitcher Jasmine Vunak, who had missed the past two weeks with an ankle injury.

She struck out 10 Hawken batters in the win.

“Everybody was glad to see her get the start today,” Ikeler said. “I rested her (on Monday at Aurora). She was a little disappointed she didn’t get to play but I wanted her to be ready to work hard today and she did. She battled and did a really nice job.”