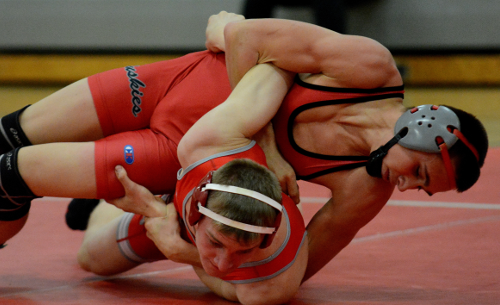 Cardinal had little trouble on Thursday improving its dual meet record to 9-2.

“Things get a little tougher next week, but just being able to compete with the large team is great,” said Cardinal coach Jeff Zeigler. “Knowing you’ve got the numbers to pull off the victories is great. Having a whole team there and to weigh in and put in almost a full team on the mat is a great feeling. It’s nice to have that many kids and the numbers and even a couple backups.”

The Huskies collected 11 forfeits in the two matches and finished 7-4 in individual matches wrestled.

Nevison, Lustig, Havel and Fabiny all drew two forfeits and Shanower and Neikirk pinned both of their opponents.

“The competition just wasn’t there for them,” Zeigler said of Shanower and Neikirk. “They both were wrestling younger kids but they looked sharp.”

Neikirk pinned his two opponents in a total of 2 minutes, 14 seconds.

“He doesn’t mess around,” Zeigler said. “He just dominates. I can’t even get him to mess around to run some different stuff. He just goes out and sticks them.”

“He looked really crisp,” Zeigler said. “He wrestled smart. He’s so powerful on his feet and his shots are powerful. He kept his head in it all night.”

Mast won by forfeit and a 17-1 technical fall.

“Trent destroyed that kid,” Zeigler said. “The kid gave him a good match and fought hard but Trent pretty much dominated.”

Freshman Anthony Stango picked up his first win of the season in a JV match.

“He won 10-8 against Beachwood for his first win,” Zeigler said. “The whole team got into it. It was fun to see the team support him and get behind him.”