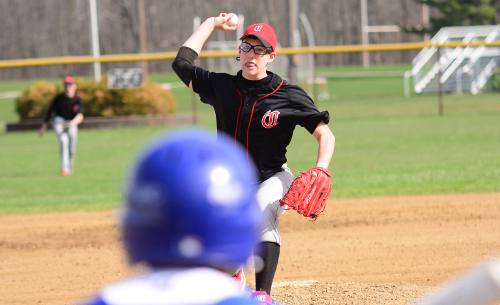 Cardinal got two strong pitching performances out of Evan List and Andrew Miller to sweep a doubleheader at Grand Valley.

“We got some pretty good pitching today,” said Cardinal coach Brian George. “Both Evan and Andrew pitched great games. They were really efficient. They did a nice job for us. We really needed that heading into next week.”

Cardinal opened game one with one run in the top of the first and blew it up with a five-run second.

Clark Thurling singled in the first and scored on a base hit by KC Cress. Joe Tucker was hit by a pitch to open the second inning. Brendan Whitney then reached on an error and Logan Schultz walked to load the bases. Cody Purpura singled home Tucker, Whitney scored on a fielder’s choice and Schultz scored on an error to make it 4-0. Ryan Bruncak and Thurling, who reached on a fielder’s choice and error, respectively, both scored to push it to 6-0.

That’s all the support List would need as he faced the minimum number of batters in four of the seven innings and only twice allowed a Grand Valley runner to reach second base.

Grand Valley took a 1-0 lead in the third inning of the second game but the Huskies rallied for five in the top of the fourth.

Lucas Fulop walked to start the big inning and Whitney, Alan Michener, Brant Zemelka and Cress all recorded hits in the inning.

“We were fairly patient and we got a couple clutch hits when we needed them,” George said. “Grand Valley jumped out to a 1-0 lead and we came back and scored to take the lead.”

Miller made sure that advantage would stand as he struck out the side twice and recorded at least one strike out in six of seven innings.

The Mustangs scored their only run of the doubleheader on a two out walk and a base hit.

Cress led the Huskies with three hits and five runs batted in while Purpura was 2-for-5 with three walks and an RBI.

“KC did a nice job,” George said. “Both him and Cody were on base early in the game. That allowed us to jump out to a lead and get into a little comfort zone. All year long they’ve been big for us. Both of those guys really, really came through and helped us get that early lead and we were able to keep it.”

The Huskies, who improved to 4-8, travel to Fairport Harding on Monday.