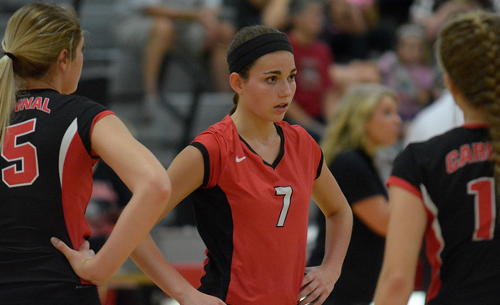 Cardinal’s goal of winning the Chagrin Valley Conference is still within reach after Thursday’s sweep of Fairport Harding.

“We haven't given up on the CVC title and we are working hard every day to obtain it,” said Cardinal coach Karisca Chambers. “Fairport didn't just lay down. They put up a good fight and put the ball where our holes were.”

The game was the first of the week for the Huskies, so the slow start wasn’t surprising.

“Not playing until Thursday this week worried me because sometimes when the girls have time off it takes us a while to get going,” Chambers said. “After we regrouped and focused, the game took a turn for the better. Game one was rough as far as team unity and team energy. The girls had a great warm up, and then came out flat to start. Communication was lacking tonight, but by game 2 we finally pulled it together and started communicating as a whole.”

“Caitlyn Lechene led us in kills and did a nice job at attacking the volleyball,” Chambers said. “Maddie Bean saved a lot of balls flying into the net. We struggled in the back row for a while, but we adjusted and covered our holes.”

The Huskies improved to 12-4 overall and 6-1 in league play.

Cardinal travels to Kirtland on Tuesday.