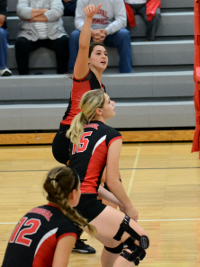 They executed that plan perfectly and make quick work of the Skippers in a 3-0 sweep.

“We controlled the game form the very beginning and that’s what we wanted to do,” said Cardinal coach Lisa Shirkey. “I told the girls we needed to run our pace, not theirs. We were able to do that. Sometimes when you get a big lead on a team it’s difficult to maintain it but we were able to do that.”

“It was a nice game to work on our offense,” Shirkey said. “Alyssa had a solid performance. She did a little bit of everything. It’s nice to see her evolve into the player that she has become. She has a strong arm ad can really put the ball down. Hayley Adams has come a long way as well. She’s starting to hit the ball and get her timing down.”

“Caitlyn Lechene, what you can’t see from her stats in the last two matches especially, we’re starting to see the Caitlyn Lechene from last year prior to her injury. She seems more comfortable on the court and her movement is better on the back row. She had 14 digs tonight moving to the ball in the back row and putting the ball down in the front row,” Shirkey said. “With Kayli Staric, it’s a timing issue when you’re running out of the middle and running those slides. They’re starting to get those down.”

The win kept the Huskies undefeated in league play and in first place as they head into the second round with their CVC opponents.

That’s an advantage the Huskies hope to maintain.

“As long as we continue to play our game we know what to expect from all of them now,” Shirkey said. “We just need to stick to our game plan now.”

Cardinal will compete in the Chagrin Falls tournament on Saturday. The Huskies will play Woodridge in the first round. A win would set up a rematch with either Twinsburg or Berkshire.