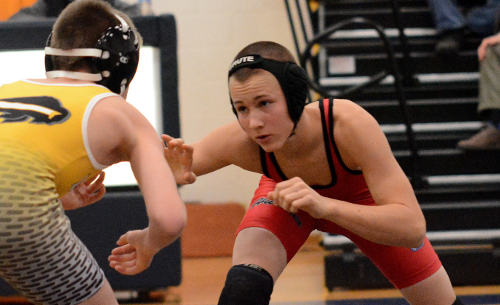 KIRTLAND—Cardinal’s wrestling team filled 13 of 14 weight classes and used that strength in numbers to pull out two wins in a tri-match at Kirtland on Thursday.

“It’s nice to be on the heavy side of the numbers this year,” said Cardinal coach Jeff Zeigler. “When it comes to duals it definitely counts. Both teams we wrestled tonight have some caliber kids, some talented kids, and a couple of my guys wrestled really well.”

Freshman Anthony Brezo drew a forfeit against Kirtland then pinned Beachwood’s Will Henry in 3 minutes, 28 seconds to finish the day 2-0 at 106 pounds.

“He was a pleasant surprise,” Zeigler said. “That’s the best we’ve seen him this year. I think he’s been a little bit culture shocked stepping into the high school lineup but that was a nice victory for hm. The kid wrestled him tough. He made some mistakes but he came out on top.”

Argento and Fabiny collected two forfeits each while Mast and Neikirk both had a forfeit and a pin. Neikirk stuck Beachwood’s Jon Slain in just 38 seconds.

“Trent looked really good.,” Zeigler said. “My 182 pounder up against Bialosky, he wrestled really tough even though he lost. He wrestled well. My new guys, they’ve got a long way to go but they’re scrappy and they wrestled as a team. IT was nice to have the numbers.”

Shanower drew a forfeit and won by a 17-1 technical fall over Beachwood’s Jaylen Whitt.

“Craig has so much talent,” Zeigler said. “He just needs to keep it together and stay focused the whole match. He really has some incredible speed and strength. It was nice to see him keep it together for six whole minutes.”