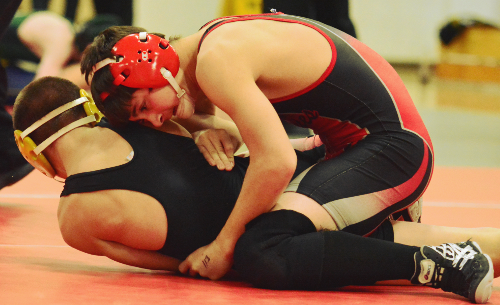 Wickliffe finished second with 133 points and Harvey rounded out the top three with 132 points.

“It was a good day for the Huskies,” said Cardinal coach Jeff Zeigler. “I was pleasantly surprised with a lot of my younger guys. They all wrestled well all day. The whole team came together and wrestled as a group and supported each other. We put some nice numbers out there; 170 team points, that’s a nice tournament.”

Mast pinned both of his opponents to win the 113-pound championship.

He earned a bye in the first round then stuck Wickliffe’s Jake Buttari in 56 seconds and Garfield’s Guy Peart in 1 minute, 14 seconds in the championship bout to win his second straight Cardinal Tournament championship.

“He’s a very tough kid, a state caliber kid I believe,” Zeigler said. “He did well all day and wasn’t really even challenged all day.”

Shanower was even more dominant.

He pinned all three of his opponents starting with a 10-second fall over Aurora’s Michael Sapp in the first round. He flattened Wickliffe’s Patrick Bonano in 1 minute, 14 seconds in the semifinals and finished off Harvey’s Willie McClain in 2 minutes, 25 seconds in the finals.

“He put it together,” Zeigler said. “Craig is a hot and cold wrestler but was solid all day. He made very few mistakes and ends up with his first tournament championship. He had the fastest pin and had three pins all the way through. It was a great day for Craig. I’m really proud of him.”

“Those kids are very tough kids,” Zeigler said of Mast’s and Neikirk’s opponents. “Cody at 132 was a state alternate last year and Logan Kissell is an up and coming freshman that is very solid. To beat a state qualifier as handily as he did is a testament to his abilities. Ian needs to step it up. This was his first match since he’s coming back from injury. He’s probably not wrestling up to his potential yet but we’ve got a lot of stuff to work on. It’s a long season.”

“I thought that Bryn Havel, who finished second, did an outstanding job coming from where he came from last year to where he’s at now,” Zeigler said. “It’s a huge improvement.”

Khaleel Samir (160) and Donovan Drebus (195) both finished third for Cardinal.

“Overall we had a good tournament,” Zeigler said. “I’m excited about Khaleel Samir, who is a move-in from Lakewood High School. He’s a real talented athlete. He’s definitely going to contribute to the team.”