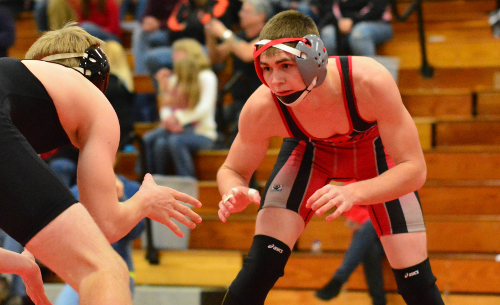 Huskies win four out of five at Fairless Duals

Cardinal’s wrestling team is short on bodies but the Huskies use quality over quantity to make up for their incomplete lineup.

Trent Mast and Ian Mast both went 5-0 and Brandon Neikirk, Brandon Nevison, Khaleel Samir, Bryn Havel and Lester Troyer all finished 4-1 to lead the Huskies to a 4-1 record at the Fairless Duals in Navarre on Saturday.

“To compete in duals with the few numbers we’ve got is not easy,” said Cardinal coach Jeff Zeigler. “To come out with four victories against good caliber teams I thought we did alright.”

Trent Mast competed at 113 while Ian Mast wrestled at 126.

“The brothers are wrestling really well,” Zeigler said. “Every outing it seems they try to outdo each other and stay undefeated on the day.”

“He wrestled well,” Zeigler said. “He was conservative against the state qualifier but he got the victory.”

Nevison, who was 4-1 at 120, was put on the spot in the Huskies’ match against Fairless. Due to the match starting at 126, Nevison was the last Cardinal wrestler to take the mat and he finished with a pin to lead the Huskies to a 39-33 win.

“It came down to Brandon Nevison at 120,” Zeigler said. “He had to at least win and he pinned so that gave us that dual. Getting the pin to clinch that dual for us against Fairless was a big victory. He’s wrestling real well.”

Nevison finished with two pins on the day.

“He stepped it up,” Zeigler said. “We needed a win out of him to clinch the dual. He was the last man on the mat, the way the rotation went. We knew he couldn’t lose. He had to win and he gets the pin for us.”

“The whole team wrestled well all day,” Zeigler said. “I was pleased.”

“His only loss was when we bumped him up to 138 to try and win the match against Fairless,” Zeigler said.

“He’s coming around,” Zeigler said. “He’s working well into our lineup. Not being with us after being a move-in from Lakewood, he’s picking up on our lingo and getting on the same page with us. He’s putting some nice moves together. He’s looking pretty good.”

The big surprise for Cardinal was Troyer, who finished 4-1 at heavyweight with two pins. Troyer joined the team just a few weeks ago and he’s off to an 8-2 start with five pins despite having no previous wrestling experience and giving up nearly 50 pounds to his opponents.

“He’s a horse,” Zeigler said. “For a first year guy that doesn’t have a whole lot of wrestling experience he’s doing a nice job. He’s fun to watch. He says, ‘I’m just going to attack coach.’ Go get him man. He’s having a lot of fun with it.”