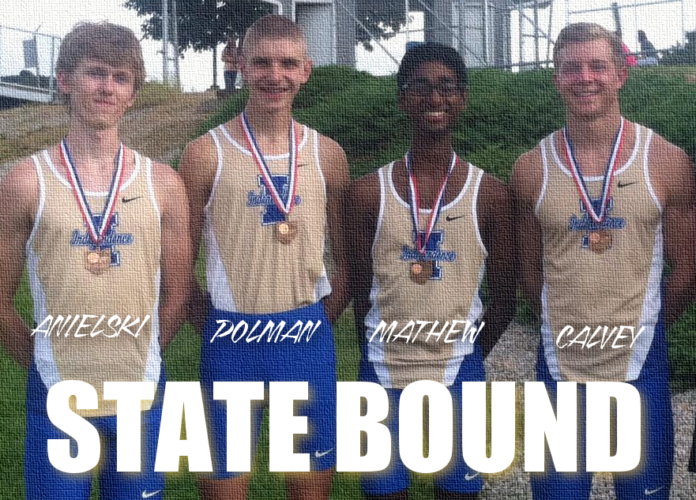 The time of 8:15.74 was as season best and earned the relay team a spot in next week’s state meet.

“It is insane,” Mathew said. “I think this is going to be an amazing way to end my running career at Independence.”

Mathew, Polman and Calvey all ran personal best splits in the race.

“My 2.06 split was the fastest I have ever ran so I was really proud,” Mathew said. “I do want to drop a second or two more at the state meet.”

Polman ran a 2.05 second split and Calvey anchored the race with a 1.56 second split to move the Blue Devils from fifth all the way to third.

“I couldn't be happier about how the race went,” Calvey said. “We kept a solid position through the whole race and when I took the baton we were in fifth place with Gilmour and McDonald in striking distance. I went with Gilmour and we took down McDonald. I was extremely happy with my time.”

Calvey, who placed second in the 400-meter dash at the state meet as a freshman in 2012, suffered a series of injuries that hampered his career at Independence. As a senior, he hoped to go out with a bang.

“We knew that we had the ability to get a place in the top 4 but we knew that we needed to perform at a higher level than we have been,” he said. “My teammates stepped up today and we left everything on the track. Earlier you asked what the perfect end to my career would be. This is it.”

Throughout his four years at Independence Calvey has been known as a closer. That’s why his teammates were confidence he could close the gap to send the team to state.

“I had a lot of confidence in what Brian could do,” Mathew said. “So I knew Brian would try his hardest to qualify us out and he came through in a huge way.”