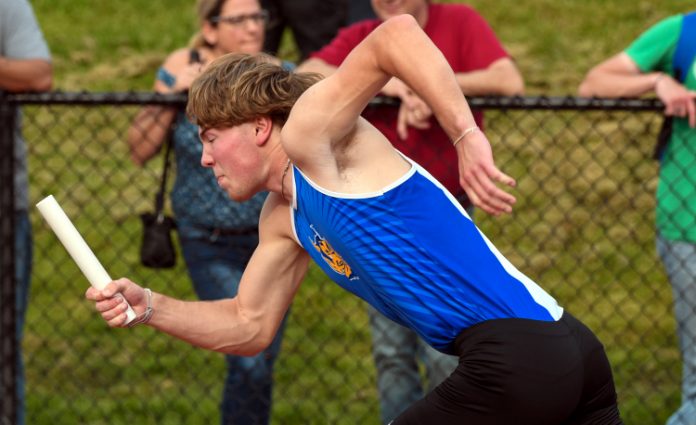 Six Independence athletes punched their tickets to state after finishing among the top four at the Division III Massillon Regional Track & Field Championships on Friday.

Leading the way is senior Emmett Stralka, who qualified for the state meet in four different events.

He also competed in two relays including the 4×200, which won the regional championship. Jack Taliaferro, Kyle Zygmunt, Lucas Martinez, and Stralka ran that race in 1:29, a new personal record for the team.

“Our team set a goal to be back down at the state meet and compete against the best,” said Zygmunt, who also qualified in the open 400. “I think my 4×200 was better than my 400. I felt my exchanges between Jack and Emmett felt great.”

Martinez, Taliaferro, and Deston Boscarelli also competed in that event.

“Overall, I am very satisfied with how all of us performed today,” Martinez said. “It was a group effort and everyone knew what they had to do, and we all did exactly that. Not only did we take first in the 4×2, but we also set a new school record of 1 minute and 29 seconds, which I am very proud of. I think all of the guys ran their hearts out today and it paid off in the long run.”

“It is a great feeling getting back down to the state tournament,” Zygmunt said. “I am very excited to be running at Jesse Owens Stadium. That was my goal all year to experience running on that track.”

Zygmunt returns to the state meet with more confidence after competing at the meet last spring.

“Since I ran last year, I know the competition is the best of the best in Division III,” he said. “I know in both events I have nothing to lose and have to give it my all.”

The Blue Devils placed fifth as a team in the boys’ competition and the five headed to Columbus are cautiously optimistic about their chances to climb the podium.

“We can’t get too comfortable yet though because I want that first-place finish next weekend at the state meet more than anything and I think all of the guys do too and we know we can do it, especially with the times we have now,” Martinez said. “I think what it’s going to take to win it all is just everyone staying healthy over the next week, staying consistent with our handoffs, and just running all out like we always do. I know we can take home a winning title in both the 4×2 and 4×1 and I’m excited to see what’s going to happen.”

Sophomore Casey Adams also returns to the state meet after earning All-Ohio honors last spring in the long jump. She placed fourth in the event with a best leap of 16-feet, 5 ¼ inches.

“It is very exciting to go back to state,” Adams said. “This was really the goal and to have reached that is just an overall amazing feeling.”

Adams also will head to the state meet more confident after gaining experience on the big stage last season.

“Going to state last year really does help me in preparing for this year,” she said. “The environment and competition will be no surprise. How you handle the pressure is huge, and coming in with knowledge of how to deal with the stress of competing at the highest level is a relief.”