Several Independence athletes have teamed up with their classmates to raise money for the Leukemia and Lymphoma Society.

Through their fundraising efforts, the team of Blue Devils hopes to be named the LLS’s 2021 Students of the Year.

“We chose to get involved with LLS’s Students of the Year program because we have heard about all the good things they do to help people fighting blood cancer,” said freshman Eliza Botzman, a team leader and member of the Independence soccer and basketball squads. “Even though all the fundraising money goes to blood cancer research, this research can benefit many other types of cancer research as well. We thought it would be a great opportunity to help others fight back. Most high schoolers don’t get to be a part of something this special. We are so honored and excited to be a part of the Students of the Year program.”

Independence’s LLS Students of the Year team began its efforts on Jan. 9 and now are using any means available to raise funds during these challenging times.

COVID protocols have limited the Blue Devils to using social media and other technological advances to spread the word.

“We have been doing our best to get the word out by Facebook, emails, and text messages,” Botzman said. “We also sent letters to our family and friends so they could receive the word in more than one way. It’s been hard getting the word out to people though because during COVID we can’t tell them about it in person or have big fundraising events. We are spreading the word out in every other safe way possible. Currently, we have online donation pages and Facebook pages where people can donate. We also plan to have some virtual fundraising events in the future.”

The Blue Devils are focused on raising money for general cancer research but their inspiration is drawn from a pair of local teens.

Tim Tusick and Colin Bowser both are blood cancer survivors and their battles motivated the Blue Devils to do their part to honor their friends and to make a difference in the lives of others.

“Seeing how brave and young Tim and Colin were really made us realize how many lives we were going to impact through this fundraiser,” Botzman said. “It was really inspiring and motivational to our entire team to listen to the stories of Tim’s and Colin’s journey through battling cancer. After hearing their stories, we knew that this fundraiser would be an experience we’d never forget.”

Donations will be accepted through Feb. 27. 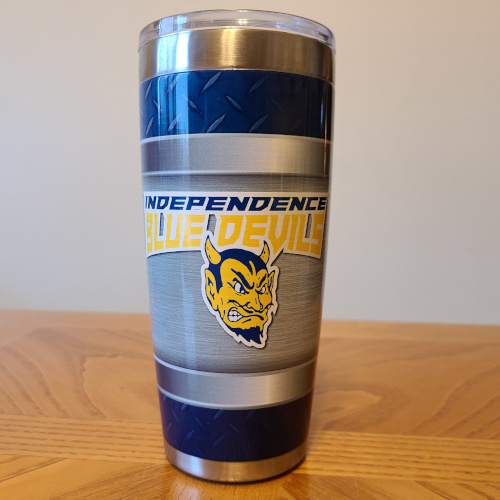