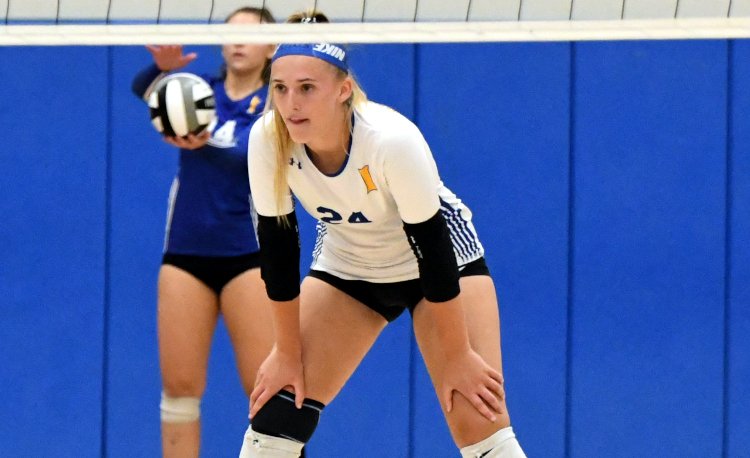 “It was an incredible feeling to beat them, especially in their gym,” said Independence senior Macey McNamara. “It was a great environment to play in to prepare us for the postseason, as Huron always packs the gym with fans.”

Independence has traveled to Huron in each of the past few seasons and it’s by design.

The Tigers draw a huge—and raucous—fan base and Independence head coach Tony Messina always is eager to challenge his players to prepare them for the intensity—and finality—of the postseason.

“It was a war,” Messina said. “That gym is hard to play in. We go there for the adversity, but it was pretty tough. The kids just played really, really well. We won the first one. I thought they had us but we came back. It was back and forth. It was crazy, they’d have a five-point run and then we’d have a five-point run. Nobody could break away. Then, in the tie-breaker, Macey came in and hit a couple of serves and they made a hitting error and we got out of it.”

“We’re resilient,” Messina said. “When we went to that Nordonia tri, we didn’t have our best stuff and we had to battle through a tie-breaker with them to get out of that. That took some guts. To come back after set two against Mags, that took guts. Now, tonight, in that gym, which is hot, their fan base and the kids yelling, it’s a hard place to win. They got through all that. Am I happy about that? Absolutely. We’re into October now and they’re showing me they can get through that adversity. We didn’t have our best stuff tonight, but we got through that adversity.”

Independence’s seniors have experience playing in that gym and they helped keep the younger Blue Devils focused and on task.

“This experience helped us to keep the underclassman focused on the game,” McNamara said. “We have been working on staying focused during each set, which helps us come back from a deficit and to block out our surroundings.”

Freshman Aubrey Anders played like a veteran in putting the ball down in key situations.

“She played really well and had a pretty awesome night for a freshman,” Messina said.

Anders was laser-focused on the match and that helped her to overcome any nervousness she experienced.

“Knowing that my teammates are there to support me and back me up helps me manage the nerves,” Anders said. “The key to my success was the fact that my teammates and coaches, and our crowd, had the positive energy to encourage me throughout the rough patches of the game.”

Now that she played in a five-set battle against the defending state champions, Anders is ready to push forward into the postseason.

“I think that in future matches similar to this one, the nerves will go down since I’ve played in similar games,” she said. “Now that I have experienced the intensity of this match, I will know what to expect.”

Huron put together a couple of runs early in the fifth set and led 7-3 and then 11-9 before the Blue Devils, behind key plays from Sammie Barther, Callie Prokopius, and Abby Avila, tied the match at 12-12.

It was McNamara that took over the serve with the match tied at 12 and set the Blue Devils up to finish off the Tigers.

“I have always loved playing in big matches,” McNamara said of her mindset approaching the service line. “As a senior, I want the ball in my hands because I am confident that I can come through for my team.”

Did someone order a 2020 State Volleyball rematch because sheesh 🥵 The Tigers took on the Blue Devils for a five-set stunner. This game did not disappoint, both teams were fighting for every point. The Blue Devils took the W tonight, 3-2 @huronschools @IndyBlueDevils #BCSNE pic.twitter.com/R6B8CqViiE