Independence bounces back with win over Orange 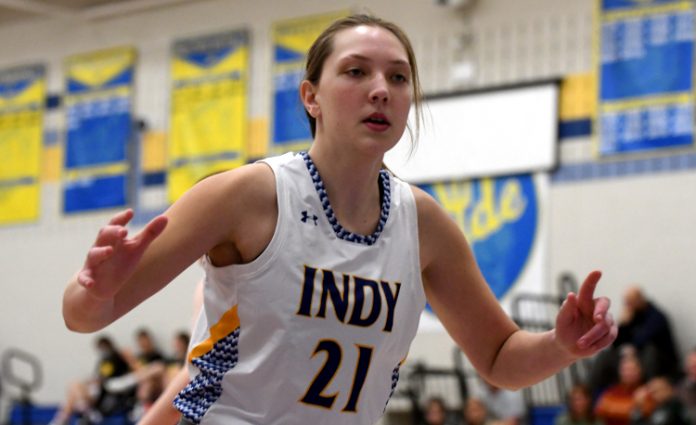 Independence bounced back from a season-opening loss at Parma with a convincing 53-32 non-conference win over visiting Orange on Tuesday.

The Blue Devils trailed after the first quarter, 10-7, but outscored the Lions the rest of the way, 46-22.

“I think the first game showed us a lot of things that we could work on and we really did have a couple of great practices afterward,” said Independence coach Hugh McMahon. “Even then, we fought our nerves and our excitement in the first home game tonight, but once we settled in, we executed the things that we really been working on. I was really, really happy with the progress that we made.”

Kara DeSmith got Independence going in the second quarter.

She scored seven of her eight points in the quarter and Addie Westerburg and Cat Rieger each added four of their 10 in the frame to help the Blue Devils outscored the Lions, 22-2.

“It was a lot of simple things,” McMahon said of the second-quarter run. “Defensively, we were doing a great job the whole time. On offense, we were trying to run before we had the ball or we were going too soon and we just had to slow down a little bit and take a look and be strong with the ball. Once we settled down we did a great job of finding the open people and executing what we were running.”

Paige Priebe, who scored a game-high 11 points, contributed three points to that second-quarter run, and then she came out of the locker room on fire.

She drained two 3-pointers and added another two points to help Independence extend its lead to 45-22 heading into the fourth quarter.

“After the first game of the season and the loss last week, we were eager to get our first win,” Priebe said. “Now, we hope to carry this momentum into our upcoming games.”

Priebe felt the Blue Devils struggled early to overcome their nerves, but like the rest of her teammates, she found her comfort zone in the second quarter and was happy to lead the team in scoring.

“Since it was our first home game of the season, we were all a little nervous and excited, but once we settled in we were able to play our game,” she said. “Coach McMahon has helped me step into my role and I knew In order for us to be successful I needed to be aggressive and get to the rim. I now have trust in myself as a player to stay calm and be able to perform under pressure in situations when it is most needed.”

Priebe led the team with 11 points, Westerburg and Rieger both contributed with 10, DeSmith and Addie Walker both finished with eight points, Casey Adams scored four, and Ashley Adams added two points in the win.

“That’s the way we like to play,” McMahon said. “We rotate eight or nine girls, and so we share the ball. We’re really preaching that if somebody’s got a better shot, let’s get it to them and so they’re really starting to believe in themselves and to believe in each other so that they’re willing to make those passes when they need to.”