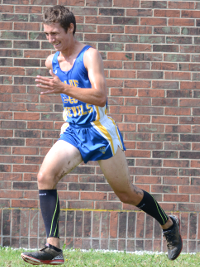 What a difference a week makes.

After opening the season with a middle of the pack finish at the Berkshire Early Bird Invitational, the Independence cross country teams turned in a strong performance at the 2014 Avon Lake Early Bird Meet at Lorain Community College on Saturday.

The Blue Devils’ boys won the meet and the girls finished third.

Sophomore Tyler Polman finished second overall with a time of 17:13.1. He was less than seven seconds behind Buckeye’s Colin Theis.

“He ran better this past week,” Craig Polman said. “He won this meet last year but the kid he raced against on Saturday was in the upper division last year and he was in our division this year. He’s a pretty good runner. It’s not a big deal to lose to a kid of that quality. He could definitely be a top 10 in the state type of guy.”

“I would say out of everybody, I was most pleased with Colin’s time,” Polman said. “I really looked at him as our No. 5 runner this year but he took about a half minute off from the first meet.”

“The places in the meet were fine,” Polman said. “The times were still a little bit slow. Colin, who was our fourth runner, had he run that time and been our fifth runner I’d have been really happy with the meet, but he was our No. 4 and Adam was No. 5. It didn’t really hurt us at yesterday’s meet but we want to keep gaining ground on these other Division III schools.”

Senior Amanda Pucella and sophomore Maria Sagi finished among the top 10 in the girls’ race to lead the Blue Devils to a top three finish behind Padua and Beaumont.

“The girls’ improvement from week one to week two was even more so than the boys,” Polman said. “I really was disappointed in that first week meet. Berkshire just clobbered us. Their No. 5 was over a minute ahead of our No. 1. That’s a team with five girls running that we beat last year and they’re that much better than us. It was really a letdown last week.”

“I think most of our girls ran a much better race this week,” Polman said. “I think overall our girls improved quite a bit. Maybe that’s just that experience of getting that first hard run in of the year.”

The Blue Devils will compete in the Tiffin Carnival this weekend.