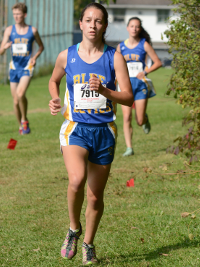 “What a terrific day all around,” said Independence coach Craig Polman. “It was beautiful weather-wise, the course was in great shape and we competed really well.”

Led by sophomore Tyler Polman, who finished first with a personal best time of 16:04.41, the Blue Devils ran as a pack to beat the Badgers by just three points.

“That’s faster than his siblings ever ran on that course,” coach Polman said. “He went out there pretty hard and took command early. The team in general went out pretty hard and got in good position. For most of the season the guys went out conservatively and moved up slightly in the race. (On Saturday) we got a pack toward the front early and they worked together. By somewhere between the first half mile and mile into the race I was feeling very confident. I wasn’t as confident going into the race as I was when I saw how they were competing.”

“The boys really stepped it up and turned it on,” Polman said. “We’ve been talking about this day for a while. I basically told the kids that how we perform at the conference meet is how we’ll look back on the season and define whether we were successful or not. We ran against Berkshire three times this season and finished behind them every time. The kids were saying they could beat them and were ready but up until that point they hadn’t brought it physically or mentally.”

Running without three of its top runners, the Independence girls finished third overall. Berkshire finished first and Hawken was second.

“I would have liked to beat Hawken but it’s hard to get a team fired up to compete for second place,” Polman said. “Realistically we knew we didn’t have the personnel to battle Berkshire and we were only running with five even though Maria Sagi was back from her injury.”

Neither returning state place winners Jen Wisniewski nor Dana Zaccardelli has competed in a race this season and the Blue Devils also were without Nicole Zaccardelli, who was nursing an ankle injury.

Senior Ashley Pucella led the Blue Devils with a seventh place finish in 20:11.05.

“She really ran a terrific race,” Polman said. “She’s kind of an up and down performer. Some meets she runs spectacularly and other meets it’s like a holiday or something. The key is to get her excited and motivated. It’s more of a mental than physical situation. It’s getting her focused on a goal or reason to push herself and run hard. I think she was motivated (on Saturday). That was a personal best for her by about 45 seconds.”

Pucella’s times are consistent with those of the individuals who qualify for the state meet. Polman hopes she continues to improve and realize how close she is to making it to the big meet.

“I want her to think that she could possibly qualify for the state meet as an individual,” Polman said. “She has to know she’s a top runner and can run with some of the elite girls.”

“Maria is coming back from an injury,” Polman said. “I think it was frustrating for her to be out injured. She’s our girls’ captain and going to meets and not being able to compete gets a little frustrating. It was good for her to get back out there on the course. She’s not really running at a personal best, she’s behind in her training, but she had a good meet for herself.”

“Kim Rega, she’s our freshman, and it’s a big jump up from middle school to high school,” Polman said. “The training is a lot more serious and they’re running a lot more. It’s an adjustment. I think she’s made a lot of progress this year. Sometimes when you’re not the No. 1 or No. 2 runner and winning all these individual awards it’s hard to get that internal motivation or confidence but she really has and running a lot of these meets with only five girls, her improving as much as she has this year has enabled us to get a third place finish at the conference meet.”

The Blue Devils return to action on Saturday when they travel to Medina for the Division III District Meet.