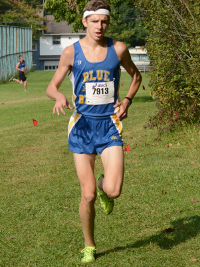 MIDDLEFIELD—Even without one of its top runners the Independence boys’ cross country team managed to win the 2014 Husky Invitational at Cardinal High School on Saturday.

“We got done what we needed to get done,” said Independence head coach Craig Polman. “I was really happy with the way they finished because that meet was pretty tight coming down to the end. Most of the guys on the team seemed to move up a place or hold a guy off coming up to the finish line. As tight as it was, that could have been the difference.”

With Shane Mathews out sick, Independence relied on its depth to win the race.

“It was nice to have Ethan back. He was our sixth guy but he will be in our top seven as long as he’s healthy,” Polman said. “Matt Mroczynski was in our top seven. He usually isn’t in our top five but we needed him because of Shane’s illness and he came through. He did what he needed to do even though he had a soccer game later that day. He showed up and ran nicely for us.”

Tyler Polman set out to beat his brother’s course record but came up short.

“I think overall it went pretty well,” Tyler Polman said. “I was actually going into the meet trying to go after the record. I think I got out a little too hard and it was hard running alone and going after the record. I just kind of fell apart halfway through. It just got harder and I couldn’t get the record after that.”

With Dana Zacardelli out with an injury, Ashley Pucella has emerged as Independence’s top runner, especially with hardware on the line.

“It was nice to see Ashley getting out after it. She was our top runner for the second time this season,” Coach Polman said. “She is really motivated when there are awards on the line. It’s pretty funny. They were giving medals to the top seven and ribbons for eighth through 15th place. She was moving up during the race and with about 200 or 400 meters to go she was running in eighth place. There was one girl, probably 10-20 meters in front of her. She’s the type of girl who puts in a lot of work and she’s just ready to get to the finish line and get it done with, but once she heard she needed one more place to get a medal she took off and ended up beating that girl by five or six seconds.”

“I think our runners moved up very well during the race,” Polman said. “We got off to a bit of a slow start but pretty much everybody outside of Amanda moved up significantly during the race. Amanda was 10th and she ran in about 10th the whole race. Maybe she was a little farther back in the first quarter mile or half mile but she kind of stuck there. Everybody else was much farther back and moved up significantly. I was really worried the way we were running early on but by the time the race ended I was fairly satisfied.”

The Blue Devils return to action on Friday when they compete in the Gilmour Academy Invitational.