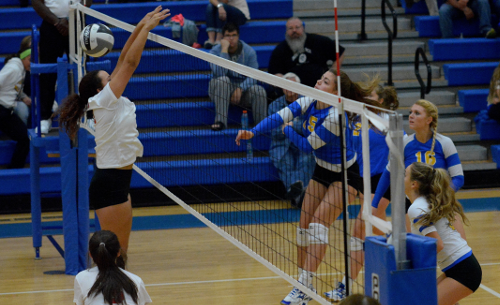 The four then went out and led Independence to a 25-15, 25-14, 25-8 sweep, putting the finishing touches on a third straight undefeated league championship.

“It feels great,” said Independence head coach Megan Osysko about her team’s three-peat. “It’s just the work that the girls put in. I’m just there hanging out and giving them as much knowledge as I can. They’re the ones on the court putting in the work and executing what I tell them to do.”

Led by Magas, Thompson, Trombetta and Zumack over the past three seasons, the Blue Devils have won 102 of 106 sets played in compiling a 34-0 league record.

“They’ve been a special group,” Osysko said. “I’ve been with them for three years. They’re a very talented group and they definitely brought the program to a level that I have expected it to become and they really set the tone for what future years should work up towards. I’m happy about that but we still have a lot more to go so I’m not going to say goodbye to them yet.”