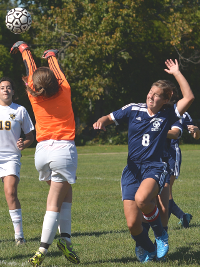 Independence comes from behind to beat Beachwood, 2-1

A slow start forced Independence’s girls’ soccer team to come from behind to win 2-1 at Beachwood on Saturday.

Hannah Cantlie scored off a Hannah Kahn deflection to give the Bison an early 1-0 lead. Julia Gutermuth tied the game late in the first half and Hannah Presot scored the decisive goal for the Blue Devils in the last 40 minutes to close out the scoring.

“We came out a little flat in the first 10 or 15 minutes and gave up the early goal,” said Independence coach Bryan Less. “I told them the second 20 minutes of the first half we really put the pressure on and started to exert our will. I think that carried over into the second half.”

Cantlie was in the right spot at the right time when Kahn’s powerful shot bounced off Independence keeper Krista DeFini. She buried the ball into the back corner for the first score of the game.

“Unfortunately we just came out a little flat and our shooting percentage was pretty low today,” Less said. “Our forwards, Jen (Wisniewski), Ashley Henderson and Hallie (Dorko), probably could have had a hat trick apiece today. They just came up a little short.”

Henderson fired a shot off a Beachwood defender that bounced right to Gutermuth, who tied the game.

“That was a nice play,” Less said. “I think it was a pass or at least a deflection from Henderson. Julia was in the right spot.”

Independence’s conditioning paid off in the second half as the Blue Devils hustled to the ball and Presot delivered the game winner for her first goal of the season.

“It was a nice corner deflection out to her,” Less said. “She put one touch on it and put it in the lower left corner of the net. It was nice to see.”

With the win, the Blue Devils improved to 6-5-1 overall and 3-1 in the Chagrin Valley Conference. Beachwood dropped to 3-7.

“We had a lot of missed touches but the nice thing was we have not been playing well in away games,” Less said. “We came out and didn’t play well the first 10 minutes or so but after that I thought they played well.”