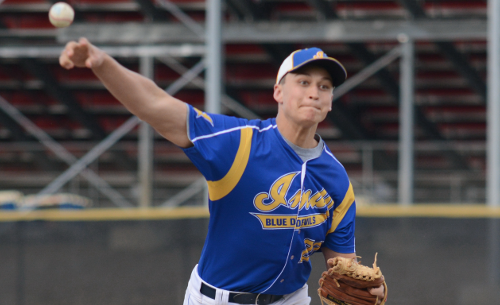 Independence comes up on short end of pitcher’s duel

Nick Niro turned in a dominating performance on Monday in a Chagrin Valley Conference showdown with visiting Beachwood.

Niro allowed just one hit, one run and struck out 12 but the Blue Devils came up on the short end of a 1-0 pitcher’s duel.

“Nick pitched a great game and did everything we needed to win,” said Independence coach Mike Gruber. “But, we came up short offensively.”

The Blue Devils outhit the Bison, 3-1, but couldn’t get the clutch hits when they needed them.

Independence had runners in scoring position in three different innings, including the seventh when they had Danny Pumper reached on an error and Devyn Skoczen doubled to leave runners at second and third with one out.

Beachwood’s Max Balazs struck out the next batter and, after hitting Daniel Mathews with a pitch to load the bases, he coaxed a fly out to end the game.

“We never had that clutch hit happen for us,” Gruber said. “There were a few innings we had runners in scoring position but could not get the bat on the ball and find a hole to score a run.”

Beachwood, which clinched the CVC Metro Division title with the win, scored in the fourth inning when Charles Colson was hit by a pitch, stole second and advanced to third on a wild pitch. He scored on another wild pitch.

The Bison turned two double plays in the game.

“Hats off to Beachwood,” Gruber said. “They played a great game in the field and shut down all opportunities we had to score.”

Austin Buc and Kyle Stefanski also had hits for the Blue Devils, who dropped to 9-10 overall and 2-5 in league play.

The two teams meet again on Tuesday at Beachwood.