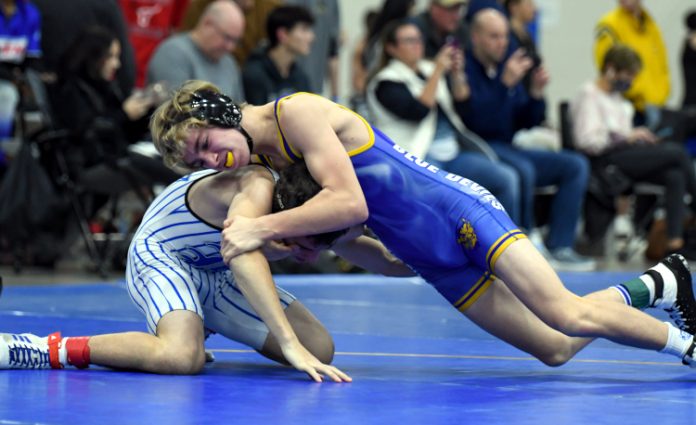 Independence posted an underwhelming 1-3 record at the Waynedale Duals on Saturday but that doesn’t tell the whole story.

The Blue Devils finished the day with a record of 20-11 with 13 pins in matches wrestled. Empty weight classes led to several forfeits, which affected the team scores.

“We wrestled very aggressively all day and competed even in the matches we lost,” said Independence coach Ken DeAngelis. “Charlie Meyer had a great start to the season with four pins on the day and Charlie Puklavec’s only loss came to the fourth-ranked kid in the state. Everybody on the team got a win including Beck Crist and Tommy Erdman with their first high school victories.”

Meyer posted a perfect 4-0 mark on the day. He flattened all four of his opponents.

“It was exciting,” Meyer said. “I was nervous starting off my sophomore year against those four powerhouse teams. I tried to stay calm and stuck to the game plan we have been practicing.”

“Vinny Kubicki and I have been working hard and pushing each other during practice,” Meyer said. “On the mat, I stayed focused and wanted to stay in control on top. My plan was to wrestle smart by not reaching and letting my opponent get to my legs.”

With four pins in four matches, Meyer is confident he’ll be prepared for a better showing in his second appearance at the North Coast Classic this weekend.

“These wins have helped my confidence going into next week,” he said. “I know there will be some really tough matches. I need to keep working hard and remember to wrestle smart.”

Rory Corrigan went 3-0 with one pin and Kubicki finished the day 3-1 with one pin. Puklavec and Erdman also were 3-1. Puklavec pinned two of his opponents while Erdman recorded one pin.

Jonah Valenti was 2-2 with two pins and Colton Franko and Crist both went 1-3 with a fall.

The Blue Devils host the North Coast Classic on Friday and Saturday.

Kirtland alumnus John Miller will complete Navy Diver training next week and he credits his time on the mat for helping him push through the grueling 15 weeks.