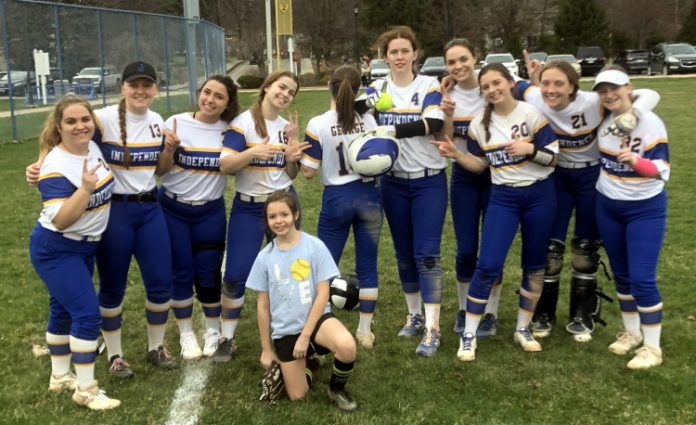 Independence opened the season with a 16-hit, 12-2 five-inning win over visiting Berkshire on Tuesday.

The Blue Devils scored four runs in the bottom of the first inning and never slowed down.

“The girls played well today,” said Independence coach Mallory Kobak. “I’m especially pleased with how consistent we were at putting runs on the board every inning. Our hitting was on; we patiently waited for our pitch and didn’t force it when it got there.”

After senior pitcher Ashleigh Porter set the Badgers down in order in the first, Natalie George drew a leadoff walk in the bottom of the inning and then Porter tripled her home for a 1-0 lead. Anna Weber then singled home Porter and Cat Rieger hit an RBI double to make it 3-0. Rieger scored on Tiffani Niro’s RBI single.

Annie Bergmeier doubled and scored in the top of the second to cut Independence’s lead to 4-1 but the Blue Devils responded with two more runs in the bottom half of the inning.

The Blue Devils added one run in the third and three each in the fourth and fifth innings to finish off the Badgers.

The middle of Independence’s lineup—Porter, Weber, and Rieger—combined to go 10-for-10 at the plate with seven runs scored and eight RBI.

“My assistant coach, Shannon Moore, and I have been playing with our lineup the past few games deciding where each player would be the best fit,” Kobak said. “What I’ve known, and has been proven to me in this win, is that every player is going to contribute for us. The middle of our order did especially well today. Cat Rieger, among others, has really been working on adjusting her swing to become more consistent. Anna Weber was incredible today and Ashleigh Porter also killed it.”

Weber was 4-for-4 with a double, two runs scored, and three RBI.

“It felt good to win and gave us confidence for the next games coming up, especially being such a young team,” Weber said. “I felt very comfortable from being so prepared from our scrimmages with big schools like Westlake and Avon Lake. A big game like today can show our conference that we are ready and always ready to go.”

“Ashleigh hit her spots well today,” Kobak said. “She’s so solid for us in the circle, especially when our offense supports and protects her.”

George and Macey McGhee both contributed to the win with two hits.

“Macey McGhee was impressive today,” Kobak said. “In her first outing as a high school freshman, she hit the ball solid. She’s a ‘dark horse’ type of kid.”

Bergmeier finished 2-for-2 for the Badgers.