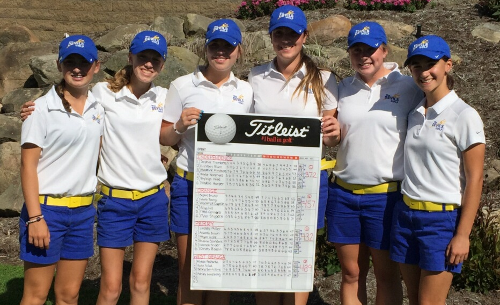 The course at Legend Lakes Golf Course proved to be a worthy adversary for the girls who competed in the 2015 Chagrin Valley Conference postseason tournament on Monday. Just six girls finished the tournament with a score under 100. Two of them led Independence to the team title.

Sophia Trombetta shot 80 to win medalist honors and Lyndsay Blum finished fourth with a score of 83. Independence's other scorers were Kaylie Kemenyes, who was 10th with a 102 and Bryleigh Wise, who shot 107.

“That course is crazy hard,” said Independence coach Karl Schuld. “The conditions were tough because in the morning it was wet and cold and then by the afternoon it started to dry out and the greens got fast. The whole playing conditions changed. Today, I think the course won. The girls struggled a little bit but I’m very happy with my girls.”

“Isabella Joseph is just a phenomenal golfer,” Schuld said. “She has ruled the roost and was the MVP of the league again this year. I think this was the first time Sophia has ever beat her. I think that was a good feeling for Sophia to come out on top for once.”

Blum opened the season with a 96 on the same course. Fast forward a month and she knocked 13 strokes off that score.

“I told her back then when it happened, I said, ‘Better times are coming,’” Schuld said. “We were down at Tam O’Shanter (in Canton) where they’re going to have the district tournament, if we’re lucky enough to get there, and she shot a legitimate 81 in her practice round the other day. She’s really confident right now and feeling good about herself. She almost holed one in that would have tied her for second. She just lipped it out off the green.”

Maddie Harper and Madeline Mindzora both finished the tournament with a 108.

Trombetta and Blum earned first team all-conference honors while Kemenyes, Wise and Mindzora were named to the second team. Harper was an honorable mention honoree.

The Blue Devils next compete in the sectional tournament at Punderson Golf Course on Tuesday.

“I think Hawken and Independence will shine better at the Punderson course,” Schuld said. “I’ll probably go down eating my words but I think it’s a course these teams are more comfortable on. I definitely think we’ll play better there and I think we have a chance to have a good day. That’s really all we’re trying to do, live to play another day now.”