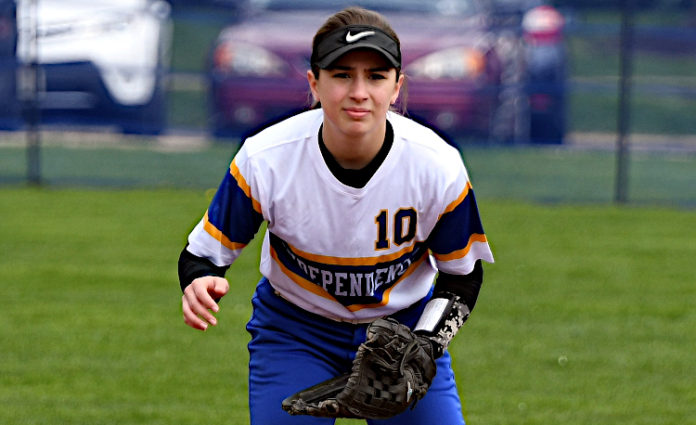 Independence played small ball and great defense in a 5-2 come from behind victory over rival Cuyahoga Heights on Friday.

With the win, the Blue Devils improved to 15-3 overall and 10-2 in the Chagrin Valley Conference Metro Division and earned a season split with their rivals.

“It was exciting,” said Independence coach Garry Moore. “I was worried after that second inning there when they scored; they had two little hits and a wild pitch and passed ball and next thing you know, it’s 2-0, but we’ve been playing really well. We struggled in the beginning but then they realized defense is going to win ballgames and that’s what happened.”

Cuyahoga Heights took a 2-0 lead in the bottom of the second on a pair of singles and a couple of errant pitches.

Independence pitcher Ashleigh Porter shut Heights out the rest of the way. She allowed two runs on six hits and struck out four without issuing a walk.

Independence began its comeback in the fourth.

Sophie George then reached on an error to start the fifth and moved to second on Tiffani Niro’s sacrifice. Alyssa Pallini and Pascarella reached on two-out singles and Porter tripled. When the dust had settled, Independence had taken a 4-2 lead.

“We had four sac bunts,” Moore said. “That’s big because two of them scored runs. Tiffani had two sacs. She was disappointed because she had a couple of strikeouts, but that’s big. In the games against good teams you, have to do the little things.”

Natalie George finished the game 2-for-3 with a double and an RBI.

“It was so fulfilling knowing that I showed up to play for my team today,” she said. “For a while, I was in a bit of a slump and coming out and giving it my all on both defense and offensive is just what I try to do on a daily basis. It was very rewarding to have that come to fruition today, especially against Heights. I think everyone on the team pulled their own weight and contributed to the win.”

She also recorded two key putouts and an assist at third base in the final two innings to keep Heights from scoring.

George made a diving catch on a popup in between home plate and third in the sixth and finished the inning with a 5-3 assist. She ended the game on a running grab of a foul ball just in front of her team’s dugout.

“This was a huge win for us as a team and hopefully, we ride this wave of confidence as far as we can into the playoffs,” George said. “We are one solid group of girls and we all show up every day ready to give it our all. If we show up to the next games with the intensity we had today, I think we will go very far.”

Sophie George’s RBI late in the game was one of the key plays that fueled Independence’s comeback victory.

“We had a perfect situation with a girl on third base and I wanted her to push bunt,” Moore said. “She let the first ball go and on the next one she drove it to right-center.”

Cuyahoga Heights won the first game of the season series, 2-1 in eight innings back on April 13. The Blue Devils have had this game circled on their calendar ever since.

“We had a lot of built-up determination since the last game against Heights,” Natalie George said. “We put in the hours, constantly working on (Julia Harris’) specific pitches. We all know how Julia pitches and it was just a matter of adjusting and being confident in the box. Before the game, the entire team was calm and there to have fun, and that’s the best environment to play in. It showed in our at-bats and defense late in the game.”

Cuyahoga Heights remains in first place with a 10-1 record and three conference games remaining. The Blue Devils are 10-2 with two league games left.