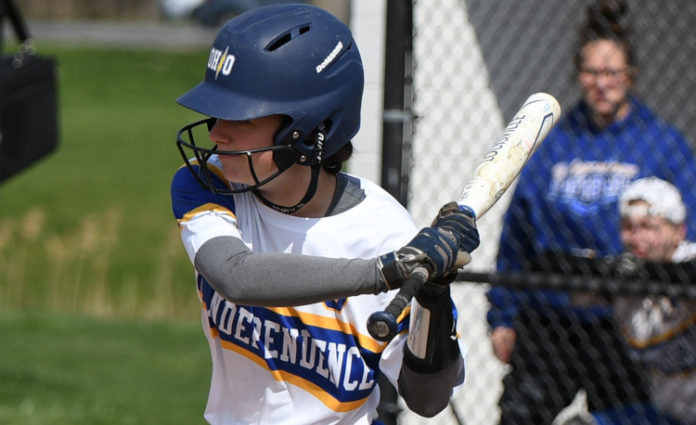 Berkshire did its best to spoil Independence’s Senior Night festivities but the Blue Devils held on for a 5-4 victory in a Chagrin Valley Conference crossover game on Thursday.

Independence built a 5-0 lead but the visiting Badgers rallied for two runs in both the sixth and the seventh innings and had the bases loaded with no outs in the top of the seventh before the Blue Devils recorded the final three outs.

“Winning any game for me is exciting,” said Independence senior Alyssa Pallini. “To do it on Senior Night makes it even more special. For us three seniors, being a varsity player has meant a lot and from freshman year, we have known the expectations. It was a fun night and one I’ll always remember.”

Pallini finished the game 2-for-4.

“Getting a hit in any game is fun and enjoyable, but to do it on Senior Night made it even better,” she said. “Being able to help my team get the win in any way is always my goal and top priority and today, nothing changed. I continued to do what I have practiced for so long and not only do my job but encourage my teammates to do theirs as well, which, overall, helped us get the win.”

Independence jumped out to a 2-0 lead in the bottom of the second when Natalie George reached on an error and moved to second on a wild pitch. Cat Rieger followed with an RBI single and scored on a dropped third strike.

The Blue Devils added two more runs in the third.

Ashleigh Porter started that rally with a solo home run and Anna Weber reached on an error. Weber scored on Rieger’s groundout.

Independence added an insurance run in the fifth when Weber hit a two-out single and scored on Rieger’s RBI base hit.

Rieger finished the game 2-for-3 with three runs batted in.

Kylie Neumore drew a leadoff walk in the sixth and moved to second on Courtney Czekaj’s single. Both runners moved up on a wild pitch and Cam Leggett drew a one-out walk to load the bases. Mollie Chapman then hit an RBI single and Annie Bergmeier hit a sacrifice fly to pull Berkshire to within 5-2.

Czekaj, Chapman, and Triskett each had two hits for Berkshire.

The home game was the last for Pallini and her senior classmates, Morgan Pascarella and Cayla Mazzola.

“Although it was a very sad day, it was a happy one,” Pallini said. “To be able to celebrate with my teammates and coaches was the best part because they are the best people a player could ever ask for. Coach (Garry) Moore and Coach Mal (Kobak) have known me as a person and player for nearly eight years, so it was sad to know that my last season with them is already heading towards the end. Overall, the sadness was overcome with a full heart and gratefulness for everything my coaches have done for me and the unwavering support from my teammates.”

Blue Devils close out regular season with win at Brunswick