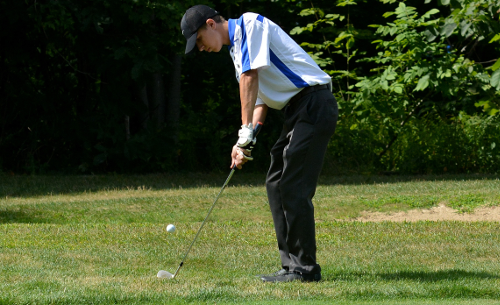 Monday’s conference match between Independence and Kirtland was about as evenly played as possible. The top four golfers for each team combined to score 170, forcing the squads to include the score of their fifth golfers to decide the match.

Independence’s Andrew Teriberry carded a 48 to give the Blue Devils the win.

“I was a little surprised,” said Independence coach Mark Echstenkamper. “It seemed like our guys weren’t playing that well but then we got the scores that we needed there. Our fifth score was better than theirs so we’ll take it.”

Kirtland’s Michael Schnur shot a match-low 37 and Brian Beres and Adam Mueller added a 40 and 42, respectively for the Hornets. Nick Brunsman led Independence with a 39 and Tyler Wilson shot 42. Joey Zamborsky and Joe Rydzinski finished with a 43 and 46, respectively.

“I was very happy with Joey Zamborsky. He came in with a 43 and Joe Rydzinski came in with a 46,” Echstenkamper said. “The conditions were tough because the course was extremely hard and it was very windy. There were some bounces that balls just took off on guys. I know Tyler wasn’t happy with his score and he and Nick both could have scored better but we’ll take it.”

Kirtland coach Greg Cosimi also felt the conditions made it tough on all the golfers.

“The conditions were very windy and golf balls were running all over the place,” he said. “Beres, Mueller, and Schnur came in with a solid 119, but we just did not have the fourth score to win it today. Hats off to Independence for a great team effort.”

Teriberry shot 55 in a win against Berkshire last week but came through when the Blue Devils needed him.

“He had a 45 against Beachwood last week so he’s been playing better,” Echstenkamper said. “He’s a sophomore that’s been playing much more consistent and he’s starting to score.”

The Blue Devils now have back-to-back wins over league powers Berkshire and Kirtland, setting up a showdown on Sept. 2 at Hawken, the winner of the Chagrin Valley Conference preseason tournament.