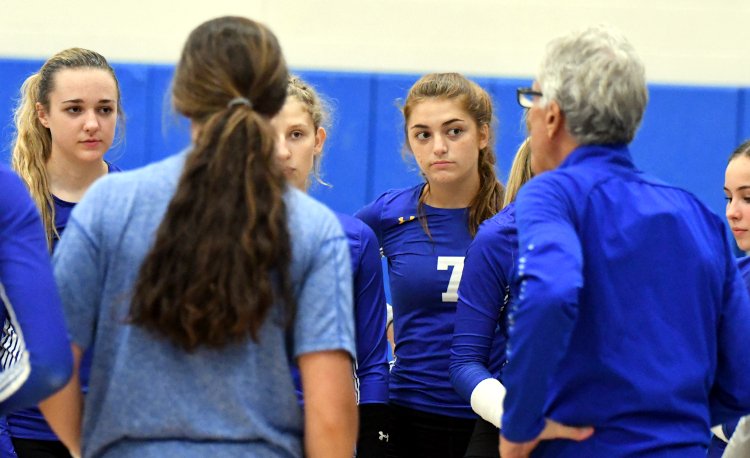 Independence edged visiting Padua in a non-conference match on Saturday, 3-2, to remain undefeated on the season.

“We weren’t at our best tonight, but we were able to serve aggressively when we needed to and put the ball down in key situations,” said Independence senior Macy McNamara. “Our key tonight was to battle every point. We didn’t pass well in the first set and it cost us. We were able to clean that up in sets 2 and 3. Then we were able to take control of the fifth set and pull out the victory.”

After dropping a back-and-forth affair in the first set, the Blue Devils dominated the next two before falling in the fourth in another closely contested set.

Barther played at Padua as a freshman before transferring back to her home school to play for the Blue Devils.

She was looking forward to this match and rose to the occasion.

“I know what a strong program they have,” Barther said. “We knew it was going to be very competitive match so it was exciting to beat them. We didn’t have a chance to play Padua last year due to COVID, so this year we were up for the challenge. It really made me happy to beat a strong program with a charged atmosphere.”

Padua was the Division I state runner-up last season.

“Tonight, we had a slow start after a big week of matches but we eventually picked up our game and started to play our tempo,” Barther said. “This helped us gain energy and come out stronger in the last few sets and play our game.”

Independence closes out the regular season with a key conference match on Tuesday against Lutheran West and non-conference matches against Crestwood and Wadsworth.

While the Blue Devils hope to finish the season undefeated, they’re focused more on a much more important goal.

“We do not focus on our record,” McNamara said. “We look at each match as a chance to get better. As it is no secret, our team goal is to win a state title and each match prepares us more and more for that.”

Barther also is focused on that elusive state title.

“Competing at states is our final goal, but there is a long road ahead of that destination,” she said. “Each match is a test to keep us on top of our game. We choose to play other great teams with intense atmospheres to help us prepare. We take it match by match. Each practice, we acknowledge what we did well and tweak the areas that need improvement. We keep our focus as a team and want to keep improving each week to reach our goal.”