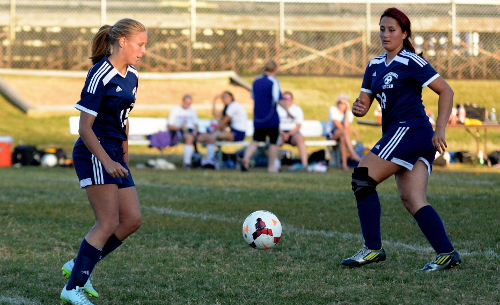 Independence junior Ashley Henderson scored one goal and had several other scoring opportunities but Brookside held off the Blue Devils to claim a 2-1 nonconference victory on Wednesday.

“I told them before the game my whole focus was for them to get better and compete for 80 minutes because many of the games we’ve had the first half was just like nonsense and then at halftime I give them a little kick in the butt and then the second half they played a lot better,” said Independence coach Bryan Less. “We came out fired up. It was 0-0 at the half and both teams had chance. We had about a 10 minute lull and they scored two goals in about 45 seconds. That was the end of our lull. The last 18 minutes we were just taking it to them.”

“The ref came up to me after the game and he said, ‘That No. 1, meaning Ashley, she had so many opportunities, you guys should have won,’” Less said. “She had a breakaway against the keeper and had some cutback shots. Her and Julia were hooking up nicely but they were also working in Emily Reed, my offensive center mid. They were doing some nice give and go’s right through the center. Ashley just came up with shot after shot.”

Independence had one final scoring opportunity as time expired.

“Olivia Jones had a shot with 15 seconds left and 30 yards out,” Less said. “It was just rolling to her and she just fired it and it went a yard in front of the goal. We almost tied it up.”

Christina Brunsman, a first year player, turned in a strong defensive effort for the Blue Devils.

“They had one really good girl. I told them at halftime, if we lose this game she does not beat us and they didn’t let her score. I was happy with that,” Less said. “Christina Brunsman, it’s her first year of soccer, she played the entire game at center back. She made some mistakes but she played really strongly. Like I said, they had a really good girl and she gave her a really tough time in the second half. She started to get an idea of what she was doing back there.”

Independence closes out the regular season on Saturday with a nonconference game at Chardon.