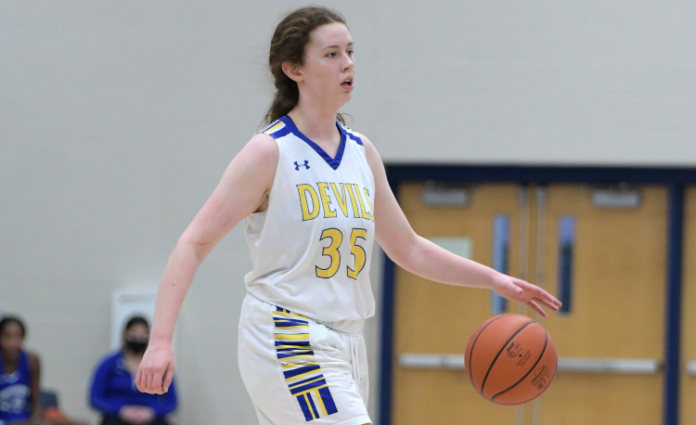 The Blue Devils held a 27-23 lead entering the fourth quarter and relied on clutch free throw shooting in the final eight minutes to seal their 10th win of the season.

“The big thing down the stretch was Alex Adams and Kara DeSmith hit 4-of-5 free throws down the stretch to win,” said Independence coach Mike Marcinko. “They had to foul us so we were shooting one-and-ones. Both of them did a good job stepping up to the line late in the game and making free throws for us.”

Independence took control early as the Blue Devils outscored Heights in the first quarter, 14-8, then increased their lead to 20-10 at halftime.

Anna Weber, who finished with a team-high 12 points, sparked Independence early as she scored eight in the first and added four more in the second. She drained three 3-pointers in the first half.

“She has that ability,” Marcinko said. “They found her in transition and there were a couple of nice drives and kick-outs. She also handled the ball, especially down the stretch against pressure because when it got down to under a minute, they were pressing and fouling so she was doing a lot of the inbounding because she makes good decisions and has good floor vision.”

Madison Stepanik got hot after the break and went on to score nine of her 11 in the second half. She was 3-for-3 from the free throw line in the third quarter.

“At times, they were triple-teaming her and sagging and doubling her up, so her 11 points were a very hard-fought 11,” Marcinko said. “She also did some nice things when she got double-teamed by kicking it back out. She was making good decisions and not trying to force shots.”

Tess Conroy fueled a second-half run when she scored 10 of her game-high 15 in the third quarter to help Cuyahoga Heights climb back into the game. Julia Jaenke and Julia Harris scored eight and six points, respectively, for Heights.

“She only played like 20-21 minutes of the 32,” Marcinko said of George. “We kept her minutes low in the first half and she played the last five minutes of the fourth quarter. We’ve been trying to ease her back in. It was nice to have her back even if it was for limited minutes, but it was a high impact. She had four points but she had a couple key steals defensively and she was pushing the ball up the floor getting us into what we needed. Between her and Alex running the one, we were solid getting into our offensive stuff.”

Independence improved to 10-4 overall and 5-2 in the Chagrin Valley Conference Metro Division. Cuyahoga Heights dropped to 11-7, 5-3.