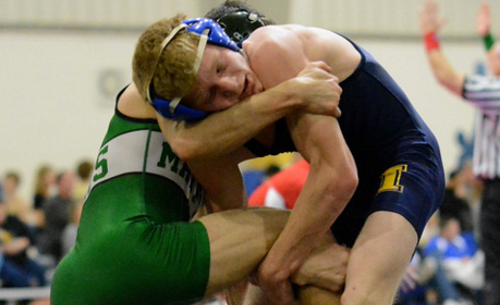 If Independence’s performance at the Waterloo Division III Classic over the weekend is an indication of what’s to come, the Blue Devils have a lot to look forward to this season.

Six Independence wrestlers placed among the top six at the tournament, which featured some of the top teams in Division III.

“We were thrilled,” said Independence coach Ken DeAngelis. “Friday was all the pool wrestling and they didn’t keep team points from that. They only kept team points if you made it into the gold bracket and nine of our 10 wrestlers did, so we’re thrilled with fifth place. We were in third going into the finals but fifth was outstanding.”

Kucera pinned his way to the 106-pound final and was winning that match before being caught in an arm bar by South Range’s Kyle Keenan.

“He had heck of a tournament,” DeAngelis said. “All four of my freshman placed including both of my pounders. Michael is experienced. He’s had a lot success in middle school and he’s figuring out that freshman can have success in high school. The kid he wrestled in the finals was also a junior high state qualifier but Michael was winning 3-2 in the third period and the kid caught us in a bar and pinned us. We’ll watch video and get better.”

Mroczynski opened the gold bracket with a pin then won by decision in the semifinals. He lost to Utica’s Quinton Piazza, 5-4, in the 138 pound championship match.

“He’s really stringing together a great season,” DeAngelis said. “He’s just consistent and he’s figuring out his offense. The nice thing for Matt was in his semifinal match he couldn’t get into his offense on his feet, which led him to a lot of success, but he still found a way to win. That’s encouraging because when you go up against a better kid they sometimes negate what you’re trying to do. He was right there with the kid.”

“He’s got a lot of ability and he just finds ways to win,” DeAngelis said. “He was wrestling a kid from Wellington on Friday, and that’s important because that’s a kid we’ll maybe see in sectionals and districts, and he gets a takedown with two seconds left to win it. He was wrestling another tough kid this weekend and turned him in the third period for two points. He’s just always finding ways to win, important.

“He is exciting,” DeAngelis said. “His best two matches he wrestled kid from Waterloo twice, once for fifth and sixth and once earlier in the day. The kid was a district qualifier who won 30 matches last year, so he was a legit kid. He stuck him both times. If he learns to keep wrestling for six minutes he’s going to win a lot of matches because he has that ability to pin.”

Benos competed at 145 pounds, one of the most competitive weight classes in the tournament. Among the eight wrestlers in the gold bracket were a returning state runner-up and eventual champion Derek Gross of Norwalk St. Paul and three other district qualifiers.

“His weight class was brutal,” DeAngelis said. “In the semifinals we’re wrestling Gross from Norwalk St. Paul who could be a state champ this year, the kid is that good. He lost two matches, one in pool wrestling and one in the consolation semis to the same kid. Both were by one takedown, so he’s right there. He’s got the potential to win those matches. He wrestled really well because his weight class was really brutal.”

David Goldwin and Kyle Corsi both placed sixth for the Blue Devils.

Goldwin was Independence’s second wrestler in the 106 pound bracket.

“He’s raw and doesn’t have a lot of wrestling experience but he’s just a scrapper and hates to lose,” DeAngelis said. “It’s fun to watch him wrestle. I coached him in seventh grade and now that he has a couple of years (experience) he’s hitting moves out there, knows position and he’s getting better every time he gets on the mat.”

“He is one of the four freshmen to place in this tough tournament,” DeAngelis said. “The kids had four to five matches on Friday and had three or four more on Saturday so I really liked this tournament because it simulated a district atmosphere. You might have a hard loss and then have to come back or beat a tough kid and have to come back with another tough kid. For these freshmen, you have something to build on. He’s a tough kid, a scrapper. He’s another kid that was not satisfied with sixth place but I have to get him to understand we’ll keep getting better but this is a great accomplishment to place in a tournament like this.”

Auston Lowe (152) and Josh Stasek (285) also competed in the gold bracket but did not place.

“Auston is a senior transfer from Midview that went undefeated in pool wrestling on Friday then lost a couple of close matches on Saturday but he did a nice job,” DeAngelis said. “Stasek made the heavyweight bracket and caught a hammer in the first round. He was beating the kid from Waterloo in his second match 3-0 in the second period and as a heavyweight you can’t stop on your knees and he stopped on his knees and went to his back. That’s a district kid and he was right there with him.”

Independence next will compete at the South Side duals in Hookstown, Pa., next weekend.