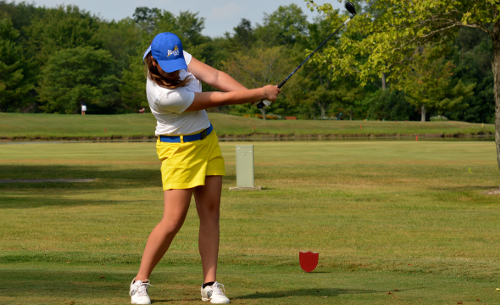 Independence’s girls’ golf team continues to improve this season and on Monday the Blue Devils turned in a strong effort to finish second at the Mentor Invitational at Legend Lakes Golf Course in Chardon.

Sophia Trombetta finished fourth overall with an 82, Lyndsay Blum shot a 93 and Bryleigh Wise carded a 98, despite recording a 10 on one hole. Madeline Mindzora scored for the varsity team for the first time this season when she recorded a 105 and Maddie Harper and Kaylie Kemenyes both finished with a 108.

“It was a solid showing,” said Independence coach Karl Schuld. “We did some good things today. You can see our worst scores are coming down.”

Independence’s depth is only going to help the team in the post-season.

“We’re definitely headed in the right direction,” Schuld said. “We’re definitely the deepest team of the teams that are on our plateau. We have six golfers that none of them are going to embarrass themselves. They’re going to go out there and put up a solid score. That’s what’s going to give us an advantage over a lot of these teams because most people don’t have a four, a five and a six and we’ve got a pretty good four, five and six. When you can get a 108 from your last scorer that’s a good day.”

Mindzora’s effort is the result of her hard work in the off-season.

“Madeline is a girl that has worked very hard over the winter to improve her game,” Schuld said. “She goes to GolfTec. Her coach is Nick Paez, who is one of the most respected coaches in the area. He was worked with two of the last three Division I state champions, so she’s definitely getting good coaching. She’s working hard at her game.”

Schuld expects to see Mindzora continue to improve and become even more consistent when her putting catches up to the rest of her game.

“Her putting has been letting her down a little bit,” he said. “Her game, minus the putting, she’s capable of shooting easily in the 90s and when her putting gets to where it’s supposed to be she’ll start shooting there consistently. She’s worked very hard but I’d like to see her get a little more confident because I think that she’s better than what she believes she is. When all these other things equal out she’s going to put up some good scores.”

“She’s another one,” Schuld said. “She continues to peck away at her score. These kids, over the weekend when you think about what they could have been doing, Lyndsay Blum had two lessons and Maddie Harper went to two lessons. That’s how you get better. It may not be the results they want now but they’re all sophomores and Bryleigh is a junior. The harder they work, it may not happen this year but as hard as these kids work and as much as they want it and as much as they want to improve I think we’re laying the groundwork for something pretty cool.”