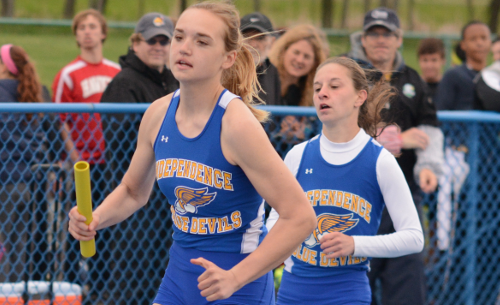 While the effects of spring break still lingered, the Independence track teams turned in their strongest overall performance of the season at the 2015 George Gross Invitational at Cuyahoga Heights on Tuesday.

The Blue Devils finished second in the boys’ competition and third in the girls’.

“I think it was a much better meet for us,” said Independence coach Craig Polman. “Definitely as a team it was our best performance of the season. I think it varied from individual to individual and you could see the effects of having a week and a half off for spring break. It was a good competition and some more favorable weather led some people to stronger performances.”

“Give a lot of credit to Brian Calvey,” Polman said. “He got the baton down a fair amount, probably 10 seconds behind, and ran a real solid leg. He ran about a 2:02 split and easily led that relay to victory. He came back and won the open 800 too. That’s the best day of running he’s had in quite some time. He’s obviously very talented but he’s been injury prone, so it was nice to see him have a solid day.”

“Ben had a real solid day,” Polman said. “(The discus) was a personal best for him, probably 12 feet further than his best throw so far this season, just a few inches than his best last season. It’s nice to see him (setting new personal records) with still another 4-6 weeks to go.”

Zaccardelli won the 800-meter run with a time of 2:33.94 and Radujkovic won the shot put with a toss of 31 feet, 2 inches. Radujkovic also finished fourth in the discus.

“Daniela really shocked me,” Polman said. “She may have been the surprise of the day. She threw 31-2, which was a personal best for her by probably something like three feet. She’s got a lot of potential. If she were to dedicate herself she’d be another solid thrower. We’ve had several over the last five years. She certainly has the potential to follow in their footsteps.”

Zaccardelli also finished fourth in the one-mile run with a time of 5:43.17.

Shane Bender and Amanda Pucella earned second place finishes. Bender ran a time of 54.96 in the 400-meter dash and Pucella cleared 9 feet on the pole vault and also finished second in the 400 with a time of 1:06.90.

“Amanda was kind of close to winning it,” Polman said. “That’s a season best for Amanda. She’s still not quite what she did last year but having the better weather and a better grip and better attitude all kind of rolled up to one and led to a better performance.”

“I think our best legs on the 4×4 were our leadoff leg and anchor legs,” Polman said. “Dana came back in her fourth event and ran the leadoff leg and handed off baton in first place. We lost ground on the second leg and held our position on the third. Ashley did a pretty good job in anchoring that. We went with her as our anchor, which was kind of unusual but I thought she was the person on our relay that was going to have the most energy left at that point in the meet and that proved to be right as she held off that Beachwood runner.”

Zaccardelli also kicked off the 4×8 with a strong leg against Cuyahoga Heights standout Allison Triskett.

“Dana led that off with a real strong leg,” Polman said. “She pretty much ran step for step with that Triskett girl from Heights, who is very talented. We lost too much ground on the second and third leg and then Ashley just kind of did what she needed to do to hold our place.”

Sagi finished third in the two-mile run and Taras was fourth.