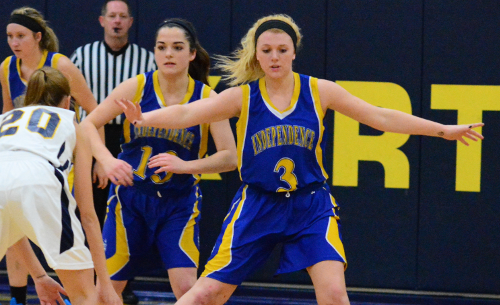 Independence gets defensive in 45-24 win over Harvey

Independence head coach Mike Marcinko hoped that by slowing down Harvey’s athletic front court the Blue Devils would find a way to win Tuesday’s game. His plan worked to perfection as the Blue Devils shut down the Red Raiders’ top players and pulled out a 45-24 victory.

“I thought defensively our girls did a great job with the game plan, as far as how to deal with their weave and their post play,” Marcinko said. “We limited their big girl to four points and we didn’t let the little shooter get any threes off.”

The Blue Devils, who improved to 3-2 overall, held their own on the boards and their transition game led to more scoring opportunities.

“We did a good job rebounding and defending to help us get out in transition a little bit,” Marcinko said. “Basically, it all started at the defensive end. Everyone did a great job in some role of support or on the ball of not letting Harvey run their offense. That was extremely exciting to see.”

The offense scored in double figures in all four quarters.

Halle Dorko led all scorers with 19 points and Hallie Zumack added 11 for the Blue Devils.

Nicole Ferrara contributed to the win with nine points and Jessica Dmitruk added four for the Blue Devils.

The Independence players reacted well to a faster paced game than the one they played at Beachwood on Saturday.

“The Beachwood game was definitely a different game,” Marcinko said. “This was more up and down, more rough and tumble. I think there was some adjustment and that kind of hurt us in our shooting that we kind of hurried some shots up because they’re so athletic. We had good looks but hurried them. We took a quality shot but didn’t take a quality attempt as far as form or technique.”

The Blue Devils return to action on Friday with a road game at Cuyahoga Heights. The JV will start at 4:30 p.m. with the varsity expected to tip-off at 6:00.